ATTENTION! This Page Is UNDER CONSTRUCTION

Arakna, the Soul Collector, is one of the first Necro characters available. She is best loved for her overpowered ability Phantom Burst. Her main tactic is taking down enemies one by one, augmenting the damage she deals with each kill. In the end, she lets loose her fury with Phantom Burst, starting the process once more.

Arakna's Passive, Soul Collector, makes it a best strategy to kill smaller groups of Darkspore. Simply by killing 5 minions, all of her abilities are better, plus an individual damage boost. Or, by using Phantom Charge, she can blink into a large group, spam some serious AOE, and she will not only kill them all, but fill all her "soul" slots. Arakna is best paired with Zrin, the Sunfist. By using Phatom Burst and then Plasma Column, all of the remaining Darkspore will be killed by Plasma Column's DPS. Arakna also works great with Tork, the Fungal King. Tork's Passive, Rampant Growth, boosts healing and poison (well, all DPS) by 25%. This means that Essance Volley will heal 25% more HP than usual.

Each variant's different stats are separated by a Forward Slash (/), starting with the Alpha Variant's and ending with the Delta Variant's.

"Fires a medium range bolt that 6-11 energy damage to a single target."

Pretty basic, and what you would expect. The range is pretty good, and the damage is too. Even though it has no special effects, it's just a basic attack. As with all of Arakna's Abilities, Necrotic Bolt is much more efficient when all 5 souls are active.

"Releases a ring of 6 projectiles, plus additional projectiles based on collected souls, that explode after a short distance. Each projectile causes 10-21 / 13-26 / XX-XX / XX-XX energy damage to all enemies in a 3m radius. All souls are consumed by this attack."

This is by far the most "overpowered" Unique Ability, with the exception of Zrin's Pain Hounds. Each projectile does very good damage, and Arakna fires 6, when out of souls. The range is massive, over 4 times Arakna's basic. Additionally, it adds on more of these projectiles per collected soul. This means that at your maximum power, you can fire 11 projectiles that do a minimum of 10 damage. The sheer damage is incredible when paired up with, say, Blitz's Passive. If half of the 6 critted, that would mean a 1-hit on most of the game's Minion-rank Darkspore. Using Phantom Burst in the right moment can disperse a whole Horde in the blink of an eye,

"Fires 3 essence bolts plus an additional bolt for every two collected souls. Each bolt follows a target, causing 13-23 / 17-28 / XX-XX / XX-XX energy damage on contact and healing Arakna for 50% of the damage dealt. All souls are consumed by this attack."

Though it isn't a very compelling Ability, it is useful nonetheless. Essence Volley launches 3 bolts (a max of 5), which both deal damage and leech the health back, healing Arakna. In a tricky situation, it could be used as a heal if you are low on health. Or, it could be combined with Tork's Rampant Growth to heal you for 75% of the damage dealt.

"One soul is collected for each enemy killed. Each soul increases the damage that Arakna deals by 5%. Some abilities also consume souls for various effects."

Two souls are collected for each enemy killed. Each soul increases the damage that Arakna deals by 8%.

This is what makes Arakna so deadly. Arakna can have up to 5 souls at once. The 25% bonus power is a bonus. The real effect is how it alters the abilities. The other 2 abilities all fire bonus projectiles at the foe. More projectiles means more damage, plus the bonus 25%. Since you earn the same amount of souls no matter what you kill, it's a good idea to kill minions before a particularly tough fight. The damage bonus is great for her already good abilities. 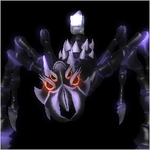 "Charges through enemies, causing 13-20 energy damage and suppressing them for 2 seconds."

Pretty simple. Let Arakna jump into a group of Darkspore and kill them fast. Also, because she is relatively nuke dependent, having an escape is a good idea. By nuke dependent, I mean that she has a lot of burst damage, and when she has her burst skills on cooldown, she is vulnerable. "Summons a semi-intelligent necroplasm for 12 seconds which will inflict a curse upon each enemy it touches. Cursed enemies will take 34 energy damage over 8 seconds."

More of a utility then anything else, Affliction Bolt doesn't do a whole lot for Arakna. Yes, it is pretty cool, but for her playstyle, it doesn't help very much. If you feel like you have to get it though, it does act as a semi-good defense for her. 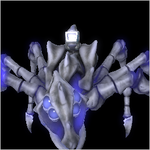 "Channeled health drain that steals 96 health from a single target over 6 seconds. While channeling, you are shielded and take 50% less damage from all sources."

Just a great ability, this makes Arakna a lot less fragile and very annoying. For example, in pvp, jump up to them once you have a decent amount of souls, use Phantom Burst, followed by a spam of Necrotic Bolts, followed by Essence Bolt, followed by this. With 2 life drains, this is one tough combo. (Keep in mind that stuns will be the bane of your existence though.) 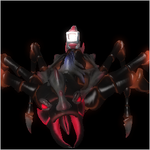 "Damage taken by Arakna is shared among the rest of the squad for 12 seconds. Healing is also shared but only when Arakna is at full health."

In my opinion the best ability in the game, Soul link can make some truly deadly combos.

This is a list of possible combos of different heroes with Arakna Delta:

NOTE: The following stats are not all necessary, but very helpful in gameplay.

Retrieved from "https://darksporegame.fandom.com/wiki/Hero_Strategy:_Arakna?oldid=16055"
Community content is available under CC-BY-SA unless otherwise noted.