Arborus, the Viridian Protector is one of the three Sentinels that are unlocked at Crogenitor Level 8 and the third Bio character available. His main course of Gameplay can be summed-up approximately like this: "Rage, Kill, Rage, Charge, Kill, Kill, Kill, Heal, Repeat", making him an excellent offensive character.

Arborus' abilities can be described in one word: DAMAGE. This is thanks to his Squad Ability, an Enrage called "Arboreal Might". Because of the enrage Arboreal Might provides, Arborus becomes a living battle ram, dedicated to destruction.

Arborus can be an effective Horde Killer, since he is made for the need of quick and efficient carnage. But without Cooldown Reduction, his prowess against Bosses is not as great.

The only thing to watch out for are Ghostly enemies, such as Ghostly Trackers, Shade Drifters, and Ghostly Elites. In this case Arborus is rendered nearly useless, so the best to do here, is to switch out for an other Hero that isn't based on Physical Damage. Or at the very least begin using a Squad (or Variant) Ability that deals Energy Damage.

Since he's an Offense-based Sentinel, Arborus should have Squad-mates with Defensive or Supportive Squad Abilities, such as Plasma Wreath, Ghostform or Strangling Briars, although he will still benefit from Squad Abilities that are completely based on Offense, like Vex's Chrono-Blink or Zrin's Plasma Column.

Splintering Cleave doesn't really differ from Basic Attacks of other Sentinels, but its damage output is really high, making Arborus a devoted smasher of Darkspore. The final hit is a groundslam, which deals much more damage than usual, so savvy players would use the final hit on more powerful enemies, such as Lieutenants.

However, the hit takes a split-second more, as Arborus raises his mace in order to make the slam, giving the enemy a chance to avoid the deadly hit. With the Swift Affix, that enemy can simply outrun Arborus with him dealing non-efficient damage, while the Genetic Hero continuously loses Health. In that case, Arborus should be switched out for a faster hero, likely a Melee Ravager, or a ranged hero, like a Tempest.

He could also add +Increased Range so that even if they do move, he might still get some damage in, although this is one of the rarer stats.

A useful bit of utility for Arborus and his team-mates, Entangling Rush is meant as a way to quickly cover distance while simultaneously making it difficult for enemies to fight, which is good in both PvE and PvP.

But since it only damages a single target, the user should choose that target wisely. It could be best focused on enemies that are the most dangerous, such as an Elite, a Lieutenant, or even a Boss if possible.

A nice combination with Entangling Rush could be Zrin's "Plasma Column", since it would damage all enemies between his starting point and the target (albeit briefly), and instantly begin damaging nearby enemies once reaching his target. Activating after reaching the target would be okay though, and would allow its full duration to affect nearby enemies for as long as possible.

Also, another possibility is to activate another AoE, such as Char's Fiery Eruption, Sage's Strangling Briars, or maybe even Revenant's Terrifying Curse (with the AoE modifier), before or after you "rush" into an area, so that the Roots would keep enemies in that area from escaping the AoE damage.

"Enrages Arborus, increasing all damage by 10%. The enrage lasts for 15 seconds and stacks up to 5 times. When an enemy dies within 20m, the duration is refreshed."

This ability (and probably all other Squad Abilities) is the main reason one wants to play as Arborus. Arboreal Might. When stacked full, it increases all Damage he deals by 50%. If combined with Shadow Cloak (or if he at least Critically hits an enemy), Arboreal Might can double his Damage Output when stacked to the max. It even affects Periodic Damage, so even heroes like Viper and Krel could benefit greatly from it.

Arboreal Might synergizes well with any offensive character, who can deal large amounts of damage quickly. Sentinels like Magnos, Zrin, and Savage are obvious choices. Each of those Heroes can deal damage hard, and deal the hurt to large amounts of enemies.

Ravagers are another good choice, such as Viper, Skar, and Arakna. Viper can make enemies die from afar with his poisons, fueling the Arboreal Might. Arakna, with her passive, Soul Collector, she is naturally suited for such an ability, soaking up souls as she refreshes the duration. Also her Essence Volley will deal increased damage, thus increase the Health Leech of it. The best combination for Skar would be to use Arboreal Might, then trigger Shadow Cloak and after that, maneuver behind the enemy and use Shadow Sting. The stacks of all of these three Abilities plus Skar's Opportunism will result in an, for the lack of a better word to describe it, annihilating attack, that will heavily wound even Destructors in barely one hit.

Most Tempests might not seem an obvious choice, but several would do well with the damage boost. Lumin and Orion both are based on dealing large amounts of damage. Meditron Alpha greatly benefits because Arboreal Might increases the healing his Reconstruct does, as well as outright destroying Lieutenants with a single Charged Strike.

"Arborus' tough skin reduces physical damage taken by 20%. If hit by a melee attack, 50% of the remaining damage will be reflected back at the attacker."

Thorn Bark is unique among all Passives. Why? It adds the Spiky Affix to Arborus. Even a slight damage reduction, no matter if it's just one type of damage, is welcome on any hero, as it increases that character's survivability.

But because it is mainly effective against most Melee enemies, it would be good to add Resist Rating, since most projectiles deal Energy Damage, however some don't, such as the Blastopods homing-missiles. Andromeda's "Repulsion Sphere" will knock-back any projectiles, so that may be helpful with Arborus. 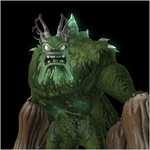 "Summons a flying creature which periodically heals Arborus or allies for 10-21 health. The creature will vanish after 30 seconds."

The classic, Arborus Alpha will get continuous healing, because of the small bug-like creature he spawns, that is called "Healing Sprite". Healing Sprite can heal very well, if properly equipped. For instance +Pet Health will increase the Sprite's survivability, while +Helpful Status Duration will not only increase the time the Sprite is on the field, but also its healing capabilities. Also +Healing is excellent, of course, but this is rare. Extra Strength is appreciated too as it boosts all abilities of Sentinels. 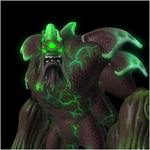 "Arborus charges to the targeted point and roars, taunting all enemies within 8m for 5 seconds and taking 25% less damage from all sources during that time."

Seemingly one of the more lackluster Variant Abilities, Roar of Derision still has its uses. Arborus, after getting a few stacks of Arboreal Might, can rush in, land a few hits, then use Roar of Derision to lessen the damage he takes, also enemies will not be able to attack since they are Rooted..

Or, lead with Roar of Derision, then use Entangling Rush to affect a larger number of enemies.

Preferably, Roar of Derision should be used against melee-based enemies. This is so they'll use melee attacks, otherwise his passive can't protect him.

A good combination with Roar of Derision, is similar to what would be used with his Entangling Rush. But in this case, Blitz's Plasma Wreath would be a better option, since it will deal more damage in the charge, as well as grant additional Resist Rating. 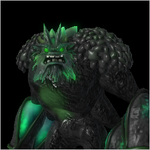 "Roots the target in place for 8 seconds and applies an infectious disease that deals XX energy damage over that period. The disease will spread to other nearby enemies, dealing XX energy damage to each."

One of the more effective of the Bio Variant Abilities, Virulent Vines can be even more effective with Arborus. Since his Arboreal Might squad ability increase all damage output, this can deal even more damage than it even would with Viper Alpha or Tork Alpha. This means he can quickly disable and kill dangerous enemies, including Ranged enemies, or debuff inflicting enemies, keeping him safe.

Combined with his Entangling Rush, he can quickly do-away with a larger enemy, and get some damage into the other rooted enemies. Also, this variant has the highest Strength of any of his variants. 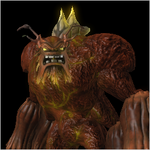 "Sends the targeted ally into a rage, Increasing the damage of non-periodic attacks by 9 for 30 seconds and regenerating 33 health over that period."

Combined with Arborus' Arboreal Might, Enrage can help him to deal LOTS of damage, as well as heal him periodically.

This is good, because his Passive can't protect against anything other than Physical Damage, so the heal will make up for any damage that wasn't reflected.

This variant of Arborus benefits especially much from Skar's Shadow Cloak. All of his non-periodic Damage will be dramatically increased after a dose of Shadow Cloak and his Arboreal Might. Adding that to what Enrage can do, will end up with more than double the Damage Output for Arborus and all his Offensive Abilities as none of those is a DoT! (Squad Abilities of other Squadmates do not count)

When equipping Arborus Delta, focus mainly on + Helpful Status Effects Applied, as it will increase the duration of both Arboreal Might and Enrage. Cooldown Reduction (as always), Power Leech is recommended, due to his Ability Usage.

Equip like any other Sentinel, focusing on Strength, Health and Power, as Arborus has quite a big Ability usage.

NOTE: Not all of these stats are necessary, but are things to keep an eye out for. Also, these stats mainly apply to just Arborus and his Abilities, not any other Squad Abilities.

Retrieved from "https://darksporegame.fandom.com/wiki/Hero_Strategy:_Arborus?oldid=16038"
Community content is available under CC-BY-SA unless otherwise noted.