Goliath, the Energy Guardian is one the first three Sentinel-class Heroes available, and the first Cyber Genetic Hero to be revealed.

Based on disrupting units and dealing whole tons of damage, this hero is rightly equipped for his task: keeping other players from being swarmed by hordes of oncoming Darkspore.

Goliath becomes first available at Crogenitor Level 3, which is generally reached right after completing the simulator at the beginning of the game.

He's a very offense-based Sentinel, focusing on disruptive attacks and dealing lots of damage, and he's welcome in almost any squad.

When it comes to partners in Co-op, Lumin is a very good choice. His Lightning Orb Basic Attack, makes enemies vulnerable to Energy Damage, which Goliath has lots of. (Ironically, both Lumin's and Goliath's squad abilities are similar.) Goliath can provide back-up for most (if not all) Tempests, by killing Darkspore that are at close range, while the other player covers Goliath with long-range firepower.

Of course, no hero is perfect. Golaith's lack of Physical Damage makes him very weak against Reflective Enemies, and when that happens, not even his high Health can help him survive. Unstoppable Enemies will also be a pain, because Shockwave's stun won't work on them. Arc Weld is very unpredictable and may not hit the enemy one may want to hit. Lastly, Target Reticule can scan only one enemy at a time, which it does so randomly, making it impossible to know which enemy will end up receiving the increased damage debuff.

In order to boost Goliath to his maximal power, one should think of Attack Speed, Energy Damage, Harmful Status Effect Duration, Health and Power Leech, and Cooldown Reduction. Also Damage Reduction of any sort, but preferably Cyber, since Goliath would take double damage should he encounter Cyber Darkspore.

"Goliath cleaves with his sword dealing 5-9 energy damage to two nearby enemies. Every third swing will instead 10-18 energy damage to a single target. Any enemy hit by the sword will receive 50% reduced healing for 3 seconds."

A good melee attack, especially considering that it's the only energy damage dealing melee attack in Darkspore.

It's very effective against healing enemies, (i.e. Mending Tanglids, Menace Weeds, Necrotic Leeches, and Elites/Captains with the 'Regenerative affix.), because it halves their healing. The fact that it deals damage to two enemies at the same time basically doubles its effectiveness.

It's also good against Orcus, because he's the only Destructor that can heal himself.

In PvP, Goliath is effective against Wraith's Ghostform, because he'd still be vulnerable to non-projectile energy attacks. It will also reduce the gradual healing in PvP, so Goliath would be even more effective with Char, because his squad ability also reduces healing.

This ability is very helpful to Goliath, as an AoE Stun is always helpful for a Sentinel. Shockwave is best used when packed in a group of Darkspore, allowing a clean sweep with Goliath's basic attack, while also keeping an eye on your health and the duration of the stun. Most Minions die instantly from this attack, though not always, especially not if they have the "Shifted" affix.

"Short range electrical attack that deals 24-32 / 26-34 / XX-XX / XX-XX energy damage to the initial target and jumps to the closest enemy 4 times. Damage increases by 25% with each jump."

This is one of the three attacks that chain to other targets, the other ones belonging to Lumin and Trioculists. However, this is the only one of the three to have a damage increase, meaning the last enemy it hits receives the most damage.This is really good against groups of Minions.

The problem with this attack is that the player cannot choose which enemy receives the most damage. But the fewer the enemies, the more likely it will be that the desired target will be hit.

"Onboard sensors find weaknesses in enemy targets and communicate them to Goliath and his allies via a target reticle. While targeted, an enemy will take 15% extra damage from attacks."

A nice little damage boost, Target Reticle helps Goliath to pick-off lone enemies quickly, or even a high priority enemy (if your lucky enough that it targets it). In co-op, Target Reticle is even more effective, since allies will be able to pick-off targeted enemies faster than if Goliath were alone, ensuring that another enemy will be targeted sooner. 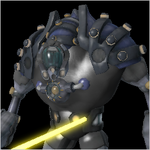 "Piercing laser beam attack that deals 35-53 energy damage to all enemies in a straight line."

The devastating Zetawatt Beam is a very good tool to Goliath, since it will clear a bunch of mobs in one hit, making him safe. A good strategy would be to lure a horde into a bottleneck, then unleash Zetawatt Beam, while it's trying to squeeze through. The result will be a lake of blood, if everything goes rightly. When most of the enemies are taken out, Goliath can simply pour on the arsenal on any survivors.

The best stats one can want to use in order to enhance the deadliness of Zetawatt Beam would be Range Increase, Energy Damage and Cooldown Reduction. Health and Power Leech are very welcome, because of the beam's massive Damage Output. Movement Speed is advised, so that Goliath can outrun the Darkspore, while Damage Reduction is well appreciated, due to the fact, that Goliath is the cannon fodder meant to attract the attention of the biggest and baddest Darkspore on the battlefield. 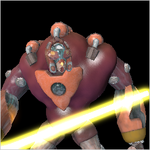 "A painful melee range electrical strike that deals 56-93 physical damage and taunts the target for 6 seconds."

Normally, Charged Strike should be used similarly to a last-option button. Goliath Beta changes that.

Since this Variant is the only one to be naturally equipped with an attack that deals Physical Damage, Charged Strike should be used against any troublesome enemies, preferably Lieutenants, Elites and Captains with the Reflective Affix. Watch out however, as this taunts the target too, making it target you and not your pal in Co-op. Then again, that's what Goliath was made for, being smothered for the team's sake. 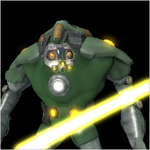 "Places a mine that will explode if an enemy comes within 3.4m of it or after 15 seconds. The mine deals 25?-35? energy damage to all enemies in a 4m radius and Dazes them for 6 seconds."

Proximity Mine is quite a good ability, especially when overwhelmed. Goliath can place the mine and then run away (but as a Sentinel, he won't do this much). Also, it inflicts a Daze, and having enemies slowed down is always an advantage, especially for Sentinels, because they're quite slow themselves, so Slows would help them a lot. 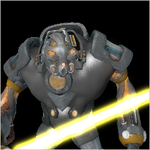 Goliath Delta is the most popular variant by far, and for good reason. Since Sentinels are usually taking huge amounts of damage, being temporarily invincible is very helpful.

Equip like any other Sentinel, focus on increasing his Strength, Health and Power. One should think of giving some helpful stats like Attack Speed, Energy Damage, Harmful Status Effect Duration, Health and Power Leech, and Cooldown Reduction. Also Damage Reduction of any sort, but preferably Cyber, since Goliath would take double damage when he encounters any Cyber Darkspore.

NOTE: The following stats are not all necessary, but very helpful in gameplay.

Retrieved from "https://darksporegame.fandom.com/wiki/Hero_Strategy:_Goliath?oldid=16046"
Community content is available under CC-BY-SA unless otherwise noted.