Start a Wiki
Jinx, the Dark Reaper is the 3rd Necro Hero available in the game, as well as the 3rd Tempest available. Focusing on energy damage, health/power leeches, and AoEs, Jinx is a good mix of offense and support.

Though Jinx is a very offense-based Tempest, like SRS and Char, she has some supportive qualities mixed-in. Namely, her Curse of Weakness squad ability, and her Spirit Catcher passive. Her Web Transfusion unique ability also is supportive, though it only affects herself.

Jinx could go well with many heroes, but there are some particularity good choices.

One good choice is to pair her with Arborus in a squad, his Arboreal Might squad enrage will increase her damage output even more, making her capable of one-shot killing minions, and even being able to quickly mow-down Lieutenants. It would also increase the effectiveness of her Web Transfusion.

Krel may also be a good choice, his Twinblaze squad ability will not only give her an ability that deals physical damage (something which all her variants lack), but it will also make affected enemies vulnerable to increased Energy Damage, which Jinx deals a lot of.

Another option is to pair her with Titan, his Dazing Shot will also give her some well needed physical damage, but it will also Daze them. That will make it harder for them to move towards Jinx, good for her Skullbomb basic, or harder for them to move away from Jinx, good for her Web Transfusion. His Absorption Shield passive ability would also be even more efficient with Jinx in Overdrive (or with Jinx Gamma's Soul Link), since it effectiveness is increased by Resist Rating, which as a Tempest, Jinx has lots of.

A more defense-based squad could be to pair her with Blitz, his Plasma Wreath would almost make her immune to energy damage. Or even Maldri's Probability Assault will disable her enemies, sort of defensive.

Jinx would go very well with both Tork and/or Andromeda in co-op. Either Tork's Sleeping Cloud or Andromeda's Gravity Storm would keep enemies in place for her Web Transfusion; Andromeda's Gravity Field would increase the damage of Jinx's projectiles, or Tork's Rampant Growth would increase the damage of her periodic attacks; And they would all benefit from Jinx's squad and passive abilities.

Since Jinx's abilities all deal energy damage, she has a huge weakness against enemies with the "Reflective" affix. If Jinx were to try facing one of these, she would most likely fail. It would be best to switch to another hero that deals Physical damage instead, at least until the enemy is defeated.

NOTE: The following is Jinx's non-modified primary stats, along with the Crogenitor Levels her variants are unlocked at.

(Strength and Dexterity are not highlighted, since Jinx is a Tempest, only Mind affects Tempest abilities.)

"Lobs a glowing skull that deals 9-15 energy damage. If the target is cursed or feared, the damage is increased by 20%."

One of the 3 basic attacks that lob projectiles, Skullbomb can easily snipe an enemy from afar, especially if Jinx is on higher terrain.

Though it doesn't deal as much damage as other basic attacks, it makes up for it with the damage boost against Cursed or Frightened enemies. However, none of Jinx's abilities Frighten, and aside from Jinx Alpha's Affliction Bolt, her only other ability that curses is her squad ability, Curse of Weakness.

But Curse of Weakness also causes affected enemies to receive more damage, meaning that combined with Skullbomb, it will deal 45% more than its normal damage, about 13-21 energy damage! (If you want to be exact, its minimum damage would 13.5, and its maximum damage 21.75)

But this ability has a huge weakness against moving targets; If the target is moving towards her while she's trying to attack it, the projectile will usually land just behind the target. One solution, is target the area where the enemy is going to be, not where it is (this doesn't always work). Another possibility, is to attack the enemy from afar, and finish it off when it holds still to attack. If a group of enemies comes-in, then do the same but with Web Transfusion.

An excellent ability, Web Transfusion simultaneously deals periodic damage and restores Jinx's health. It can be used most efficiently in a large group of nearby enemies, since it will drain life from each, thus counteracting most of the damage they'll be dealing. Using Curse of Weakness before channeling will allow Jinx to drain even more health.

In co-op, it can be paired very effectively with Tork and his Sleeping Cloud unique ability. Tork's passive Rampant Growth will increase the periodic damage (and perhaps the periodic healing) of the health drain while Sleeping Cloud keeps the enemies in place and from attacking. It can also be used similarly with Andromeda's Gravity Storm.

Technically, when Web Transfusion is active, it deals periodic Energy Damage with 100% Health Leech. Because it's dealing energy damage, enemies can Resist it, making it much less effective against enemies with the "Reflective" affix. Also, because it's an AoE, enemies with the "Shifted" affix will have less of their health drained, since they'll receive less damage.

"Curses all enemies in the target area, weakening their damage by 33% and increasing the damage they take by 25% from all sources for 10 seconds."

"Imbues a spirit catcher on you and all allies within 8m, causing killing blows to restore 2% of your maximum power."

"The spirit catcher also grants health for each enemy destroyed."

Different from a normal Power Leech, Spirit Aura restores power when you Kill an enemy, not when you damage it. Also, it restores a percentage of your maximum Power, instead of being based on damage dealt. Meaning that you'll always receive the same amount of Power, despite of how much damage was dealt. This can be beneficial in some situations, such as killing enemies with the Armored or Carapace affixes.

If this weren't good enough, its also in Aura form, letting your allies benefit from it as well. However, it's almost completely useless on Pets, since they have no Power reserves. (In Overdrive though, most pets will be affected because almost all pets have health reserves)

Combined with normal Power Leech, affected heroes can have a nearly constant supply of power, letting them spam abilities to their heart's content.

Its a bit less useful in PvP, since there are much less enemies, but Spirit Aura will still reward you for killing opponents and their pets. This is better than nothing, because despite the fact that Power restores itself in PvP, it does so very slowly. 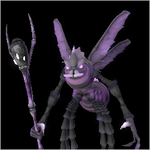 "Summons a semi-intelligent necroplasm for 12 seconds which will inflict a curse upon each enemy it touches. Cursed enemies will take 37 energy damage over 8 seconds."

Sticking with Jinx's theme, Affliction Bolt makes for a good offensive ability, especially when followed by her Skullbomb basic attack. It can quickly wipe-out a large group of enemies, also restoring her power thanks to her passive. 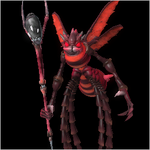 "Charges through enemies, causing 16-23 energy damage and suppressing them for 2 seconds."

An interesting ability for Jinx, Phantom Charge seems to be out-of-place, but it can actually be very useful.

One option is that Jinx could "charge" into an area, then follow-up with Web Transfusion. This combo would be even more effective if the player first used Curse of Weakness. 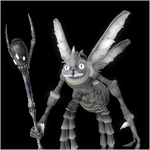 "Damage taken by Jinx is shared among the rest of the squad for 12 seconds. Healing is also shared but only after Jinx is at full health. While Soul Link is active, Jinx will gain the passive abilities of the other squad members."

Like any Necro hero with Soul Link, one would want to think carefully about the other heroes they put in that squad. There are many viable options, but some work particularly well.

One possibility is to have SRS in the squad, his Targeting Computer would allow Jinx to deal even more damage while channeling Web Transfusion. Another is to pair her with Arborus, giving her well needed defense against melee attacks via his Thorn Bark. Or perhaps with Vex's Haste Field, increasing her attack speed helping her to kill enemies faster. These are just a few examples.

There are many combinations, but it's really up-to individual players which heroes should be used. Keep in mind though, it's usually not a good idea to have your squad made of entirely one genesis-type and/or hero class. (i.e. Don't have a squad of all Necros or all Tempests)

But another aspect of Soul Link that is often overlooked, is the shared healing. Assuming that Jinx is at full health, she could use Web Transfusion to heal any squadmates that are low on health, making Soul Link a slightly supportive ability.

One would want +Helpful Status Duration, as well as any stats that would help the passives of the other squadmates. 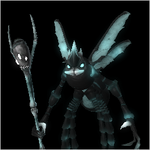 "Channeled health drain that steals 100 health from a single target over 6 seconds. While channeling, Jinx is shielded and takes 50% less damage from all sources."

A little redundant for Jinx, since she already has a health drain ability, Lifeforce Siphon is different enough that it can still be used effectively.

How is it different?

There are four ways it's different; (1) It affects a single target instead of an AoE, making it better against "Shifted" enemies. (2) Per enemy, it drains more health than Web Transfusion. (3) It shields Jinx from damage, making it more of a defensive ability. And (4) it has a slightly longer range, making it less of a short-ranged attack.

So, Lifeforce Siphon could be used to pick-off enemies that have higher health, such as Elites, Captains, or even Destructors, especially when combined with Curse of Weakness.

It could be used just after Web Transfusion to finish-off an enemy that either wasn't killed, or came at the end of the channel.

Or it could simply be used to top-off your health if it's still a little too low.

This variant requires no special stats that Jinx wouldn't want anyway. Health Leech, however, is very good to have because then you'll outheal the health you drain with Lifeforce Siphon.

Since Jinx is a Tempest, she should be equipped with lots of Mind, Dodge and Resist Rating. Power won't really be a problem, because Jinx has very large amounts of Power as a Tempest, plus her passive restores power.

Any sorts of Boons from certain Loot (optional but very helpful)

Retrieved from "https://darksporegame.fandom.com/wiki/Hero_Strategy:_Jinx?oldid=16054"
Community content is available under CC-BY-SA unless otherwise noted.