One of the only three ranged Ravager-class Heroes, Krel, the Living Firestorm, has an excellent mix of both Physical Damage and Energy Damage, as well as Direct and Periodic, Single-target and AoE Damage, making him an very versatile offense hero. He is capable of employing close/medium range attacks, hit-and-run assaults, or "spray-and-pray" combat.

Though Krel is very offense-based, he has a slightly support side. The Energy Vulnerability inflicted by his Twinblaze is a great boon, both in Solo-play and Co-op. Also the Stun his Concussive Sequence passive applies can be used to keep a large group of enemies still, or disable high-priority enemies such as Operatives.

A good possible Squad combination to pair Krel with Magnos and Sage:

Krel could use Magnos' Kinetic Wave squad ability to simultaneously knock-back and stun enemies, or deal massive damage to a single target if they have the Energy Vulnerability from Krel's Twinblaze. He could also lay-down Strangling Briars to deal Periodic Damage and stun affected enemies initially, when the stun wears-off, they would still be slowed. Any of his variants would be fine, but his Gamma variant's Meteor Strike may be appropriate. Its Stun could keep enemies inside Sage's "briars" even longer, and Magnos' passive would affect it in Overdrive, being exceptionally affective whith Krel because as a Ravager he has a higher Dodge Rating.

For Magnos, his Resonance passive would boost the damage of both Twinblaze and Strangling Briars, and his Unique and Squad abilities would benefit from the Energy Vulnerability. A good variant would be Magnos Beta, because in Overdrive, his Celestial Comet would simultaneously knock-back and stun in an area, good at keeping enemies away from him, especially when combined with Sages squad ability.

And as for Sage, his Rejuvenating Blast would greatly appreciate a 50% damage boost (via Energy Vulnerability), it would also cause it to heal even more. A good variant of Sage's for this squad may be Sage Beta, since his Virulent Vines would benefit from the Energy Vulnerability inflicted by Krel's squad ability, and in Overdrive it would "disease-stun" enemies.

Some hero's that might go well with Krel in Co-op are: Andromeda (primarily for her passive, but her unique ability could be helpful); Goliath (partially for his passive, but primarily Krel's squad ability would help him); and perhaps Skar (the Physical Vulnerability from Skar's Shadow Sting would be greatly appreciated by Krel, and most of Skar's variant abilities would benefit from Twinblaze's Energy Vulnerability).

These are only suggestions though, Krel can go very well with almost any squad or team.

NOTE: The following is Krel's non-modified primary stats, along with the Crogenitor Levels his variants are unlocked at. (Strength and Mind are not highlighted, since Krel is a Ravager, only Dexterity affects Ravager abilities.)

NOTE: Since the power-cost and effects of heroes' special abilities differ between variants, due to differences in their primary stat, in this case "Dexterity", those differences are shown here for your convenience. Each is separated by a back-slash (e.g. "/") in right-to-left order.

"Shoots three fiery arrows in a a spread cone that each deal 3-7 physical damage and cause affected enemies to burn, dealing an additional 14 / 15 / 14 / 15 energy damage over the next 4 seconds."

An excellent basic attack, Tribolt can deal both Physical and Energy damage, as well as Direct and Periodic damage, making it very versatile.

Although the projectiles' damage isn't very high, they have a sort cooldwon and a fast cast-time, and combined with the Burn they inflict it can deal impressive damage. But since they're fired in a cone-spread, all three can hit a single target at point-blank range, effectively dealing triple damage.

In addition, it is effective on both "Ghostly" and "Reflective" enemies:

Against a "Ghostly" enemy, (assuming you managed to damage it with one of the projectiles in the first place), the Energy damage from the burn will ensure that the enemy stills receives enough damage even if it keeps Dodging the projectiles' damage.

If used against "Reflective" enemies, the projectiles can keep-up a steady stream of physical damage, even if the Burn and its damage is Resisted.

Also, though it can affect multiple targets, its technically not an AoE, meaning its still effective against "Shifted" enemies.

Though a relatively slow projectile, second in slowness only to Electron Sphere, it makes-up for this with its large amounts of AoE damage.

A benefit of it being an AoE is even if you don't hit the desired target, you can still deal damage to it, if you hit a nearby target that's close-enough.

But because it is so slow, it is better used a close-medium range. (The closer the target is, the more likely you will hit it.)

Adding extra +%Projectile Speed will help to overcome its slowness, and +%AoE Damage and +%AoE Radius will make it more worth it. But if the enemy (if it's an NPC) knows that you're coming, it will head straight for you, so you can easily shoot it with even the slowest of projectiles.

As opposed to Krel's Supernova, the projectiles fired by his Twinblaze are perhaps some of the fastest in-game, and has a very short cooldown. But although they are incredibly fast, that doesn't guarantee they'll hit their target(s), but most likely at least one will hit.

If either hit their desired target(s), the results are devastating. Not only will affected enemies receive Physical damage, but they'll also be inflicted with a 50% Energy Vulnerability! This is great, because Two of his Three special abilities (excluding passive) deal Energy damage, and three out of his four variants deal energy damage as well!

If that's not good enough, its also his Squad Ability, meaning his squadmates can also benefit from it too. Its modifiers increase the effectiveness of one of its two main aspects, better for certain players/heroes (depending on play-style).

Very unique to Krel, and perhaps one of the more fun passives, Concussive Sequence is a useful little disable that is even more effective with AoEs, which Krel's variants have plenty of. One thing to note though is that it doesn't affect basic attacks and isn't affected by basic attacks.

Another thing to note is that it only applies the Stun initially, meaning the abilities that deal Periodic Damage actually won't keep re-applying the stun. 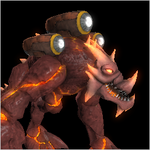 "Launches a wave of flames that starts out narrow but spreads to 16m wide, dealing 26-34 energy damage to each enemy it touches."

A fitting ability for Krel's alpha variant, Flame Surge is perhaps the largest AoE in the game, and like his basic attack is fired in a cone.

Though it doesn't deal the highest damage of Krel's attacks, it is damage none the less. It can certainly make killing a large group of enemies easier, especially when combined with the Energy Vulnerability from his squad ability.

When his Passive is in effect, it can stun an entire Horde in its tracks. 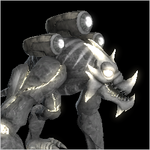 "After concentrating for 1 second, 12 streams of lightning burst out in all directions, dealing 11-56 energy damage to enemies and shocking them for 3 seconds."

With a very short channeling time and the highest maximum damage, Webbed Lightning is a good attack when surrounded by many enemies at once, such as a horde. It can affect an area so large that it rivals Flame Surge, though it isn't the common sort of AoE and is contingent on there being enough enemies for it to affect.

Since the projectiles pierce, enemies far off-screen may also be affected, meaning that Krel could quickly get more than he bargained for. If Krel becomes overwhelmed, it may be best to switch to a more defensive hero.

In addition, the stun applied by his Passive is completely useless with Webbed Lightning, since it Shocks longer than his passive Stuns. When used in sequence though, Krel can effectively disable an enemy for around 5 seconds instead of 2 or 3. 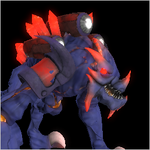 "Calls down a meteor at the targeted point. Any enemies within 3m of the impact take 20-30 physical damage and are stunned for 3 seconds."

A nice targeted AoE attack, Meteor Strike can be used effectively with Krel's passive and his unique ability. If Meteor Strike is used just before his Supernova, it the Stun will insure that the desired target(s) are hit by both AoEs. But like his Beta variant, his passive's Stun becomes ineffective. But if the Supernova is used while his passive is in effect, followed by Meteor Strike, it can also extended the duration of the Stun to about 5 seconds.

With or without his passive, the stun can keep a single target still to be hit by Krel's Twinblaze, or to quickly disable a high-priority enemy.

Also, because this ability deals Physical damage, it tips the balance of his Physical-to-Energy damage ratio, causing him to be significantly more focused on Physical Damage. 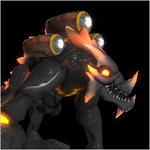 "Launches a sphere of heated plasma that zaps nearby enemies with lightning for 7-18 energy damage. If the sphere hits a target, it will explode, dealing 22-36 energy damage to all enemies within 4m."

Even slower than Krel's Supernova, Electron Sphere may seem both redundant and a liability. But it differs from Supernova in several ways:

Firstly, it has a larger AoE; Secondly, it "zaps" nearby enemies while it travels; Thirdly, it has longer range.

When Krel's passive is in affect, Electron Sphere can simultaneously Stun and "zap" enemies while it travels. Once it hits something, it can stun in a larger area than his Supernova could.

Krel could also use both abilities in quick succession, dealing massive amounts of AoE damage.

Krel should be equipped like other Ravager, that is, with lots of Dexterity, Power, and Health. Additional Crit Rating is very appreciated.

NOTE: Not all of these stats are necessary, but are things to keep an eye out for. Also, these stats mainly apply to just Blitz and his abilities, not any other squad abilities.

Retrieved from "https://darksporegame.fandom.com/wiki/Hero_Strategy:_Krel?oldid=16059"
Community content is available under CC-BY-SA unless otherwise noted.