Lumin, the Lightning Provoker is the second of the two electricity-based Plasma Heroes, along with Blitz. Lumin is one of the most offensive Tempests in the game, and a excellent partner to all Ravagers in Co-op.

Lumin is one of the more simple Tempests. While most provide some sort of utility, such as hastes and slows, Enrage, and healing, Lumin is focused on one way to provide help: by killing.

An offensive Tempest through and through, Lumin is an excellent character in both Solo and Co-op. His basic Attack deals Energy Vulnerability, which makes each subsequent attack of his deal more damage, as he is based almost entirely on Energy Damage. Able to deal with both single High-Priority targets and large groups of enemies, Lumin is, simply put, a solid character.

He is not without flaws, though. As he deals mostly Energy Damage, with only one variant having an ability to deal Physical Damage, Reflective Darkspore are aggravating. Laser Tanks, Acid Shells, and Fragbot Mechs are all dangerous enemies (some more than others), and should a player be confronted by them, it would be best to switch out to a Hero who can deal Physical damage.

He also has no form of actual defense, since he is completely offensive. He is often called one of the more... "squishy" Tempests.

A good Squad-mate for Lumin is Skar, as the combo of Thunderstorm and Shadow Cloak is deadly. As Lumin often ends up in the middle of things, Both Plasma Wreath and Plasma Column can hurt enemies who get close. Wraith's Ghostform will raise Lumin's Dodge Rating, helping him avoid most close-range attacks. Andromeda's Repulsion Sphere and Magnos' Kinetic Wave can be used to push back enemies when the player feels too crowded.

In Co-op, Lumin is a Ravager's best friend. His Passive will increase allies Critical Rating, based on Lumin's own. Blitz will especially appreciate this, as his Passive increases Critical Damage. Energy-based Ravagers in particular, such as Seraph-XS, Arakna, Krel, and Viper with his poison will all benefit from Lumin's Basic Attack as well.

"Shoots a crackling lightning orb that deals 5-15 energy damage at a single target. Enemies struck by an orb will take 10% more damage from energy attacks for the next 3 seconds. The vulnerability effect stacks up to 5 times."

A useful ability, Lightning Orb deals a decent amount of damage, as well as inflicting an Energy Vulnerability of up-to 50%, helping not just Lumin, but any other team-mates that deal Energy Damage. It is also one of the faster projectiles, so enemies are less likely to avoid Lumin's attacks.

In addition, Lightning Orb is one of the only Hero Abilities that inflict Energy Vulnerability, so keep that in mind.

"Lumin channels, causing bolts of lightning that each deal 7-17 / XX / XX / XX energy damage to descend from the sky and strike random enemies within 20m of him for 5 seconds. Each enemy in range will be struck at least once."

One of the main reasons to play Lumin, Thunderstorm is an amazing AoE. Although it may only hit an enemy once, the damage dealt is still enough that it likely won't survive, at least if it's a Minion-class enemy. If the enemy has been attacked by his Lightning Orb Basic Attack recently, they'll receive even more damage.

Using Skar's Shadow Cloak before channeling Thunderstorm will cause each strike to deal a tremendous amount of Critical Damage, quickly killing-off a horde or opponents in PvP.

Also, its AoE Radius of Thunderstorm is the same as the kill = refresh range of Arborus' Arboreal Might. So if Lumin is using Arboreal Might, he not only has an up-to 50% damage boost, and can easily maintain it when he uses Thunderstorm.

In an end level boss-pit, Lumin can simply get near the Destructor or Captain, then channel Thunderstorm. Since they are fairly large, they are more likely to be struck multiple times.

"Sends a horizontal bolt of lightning at the target that deals 16-50 / XX-XX / XX-XX / XX-XX energy damage and jumps to 2 random nearby enemies. Each jump deals 33% less damage than the previous one."

Although the jump damage reduction is less then desired, it still allows the user to choose which enemy will receive the most damage, unlike the similar ability, Goliath's Arc Weld.

This ability is very helpful in PvP, especially if they've been attacked by Lightning Orb recently.

Both of his Squad Ability Modifiers can be helpful. These are listed below.

"Lumin's mere presence charges the surrounding atmosphere, increasing the Critical Rating of all nearby allies by 50% of Lumin's own Critical Rating. "

A very helpful AoE Support, Charged Field increases the Critical Rating of all his nearby allies. Although, it is not as effective as it would be with a Ravager, since they naturally have much higher Critical Ratings then Tempests.

Because of this, if used with a Necro Ravager that has Soul Link, such as Skar Beta or Arakna Delta, this can be an even more effective support ability. Also in Overdrive, it can do the same. Since in Overdrive it will also increase Critical Damage, Lumin pairs especially well with Blitz.

Meanwhile, in PvP, having Lumin in each team at the same time can be devastating. Almost every attack will Crit, not to mention the barrage of Energy Vulnerabilities and Lighting Strikes. 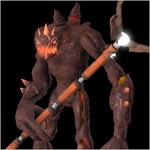 "After concentrating for 1 second, 12 streams of lightning burst out in all directions, dealing 10-50 energy damage to enemies and shocking them for 3 seconds."

Webbed Lightning is a truly devastating ability, especially for Lumin. Charged Field will increase the likelihood of each bolt to Crit, and not only that, the bolts Shock their targets too.

A good strategy to employ is to activate Webbed Lightning and, once it's done fire up Thunderstorm. The subsequent results will be devastating if used on a horde. The Shock that Webbed Lightning provides plus its short channeling time make Lumin Alpha a very strong character.

When equipping Lumin Alpha, you may want to focus on; +Harmful Status Effect Duration, +Channeling Speed, some kinds of Defensive Stats, and +Damage for Plasma Attacks. 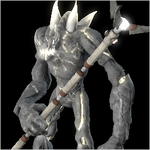 Although fairly slow-moving, especially for a projectile, Electron Sphere may be worth it in some situations. It can deal quite a lot of damage to enemies in an AoE, at least if it hits them.

In PvE, hitting them may not be problem, since in some chases they literally head straight for you.

But in PvP, that's a different story, since your opponent is another person, who may easily move out of the way. In this case, this is better used at close-range.

This variant requires no special stats, since it will benefit from any other stats that one would normally equip. (i.e. +Projectile Speed, +Energy Damage, +AoE Damage, +AoE Radius, etc.)

In addition, Lumin Beta has the highest Critical Rating of all his variants. So allies in his team will benefit most from his passive ability. 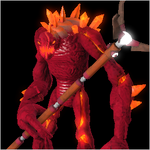 "Launches a wave of flames that starts out narrow but spreads to 16m wide, dealing XX-XX energy damage to each enemy it touches."

A very powerful ability, especially when Lumin is paired up with Skar. With this Lumin can deal damage to a large number of enemies that are chasing him, and can hurt a lot of Darkspore in a Horde Pit.

This Lumin requires no special gear, just what a player would use on Lumin to begin with. 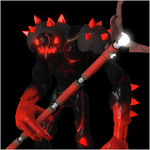 "Calls down a meteor at the targeted point. Any enemies within 3m of the impact take XX-XX physical damage and are stunned for 3 seconds."

The only variant of Lumin to have a means for Physical Damage. Meteor Strike is a good ability, which can be used to stun enemies right before casting Thunderstorm, so he has extra time before enemies start attacking during the Channel.

As he is deficient in the Physical Damage department, one should try to make Meteor Strike as strong as possible. + Physical Damage is recommended, as well as + Duration of Harmful Status Effects Inflicted, AoE Damage, and AoE Radius.

Lumin should be equipped like other Tempests, that is with lots of Mind and Power. Crit Rating is very appreciated, since it will increase the effectiveness of Charged Field. As Lumin is based on offense, he really needs to have some Defensive Stats that will keep him alive. Dodge and Resist are helpful, as he will often end up in the middle of fights.

NOTE: Not all of these stats are necessary, but are things to keep an eye out for. Also, these stats mainly apply to just Lumin and his abilities, not any other squad abilities.

Retrieved from "https://darksporegame.fandom.com/wiki/Hero_Strategy:_Lumin?oldid=16057"
Community content is available under CC-BY-SA unless otherwise noted.