One of the most anticipated Heroes of Darkspore, Maldri, the Quantum Raider is something of a surprise. An unpredictable Quantum Ravager with a wide variety of abilities, Maldri is difficult to master, but once tamed, is a very enjoyable character.

The most unpredictable Hero in the entire game, Maldri becomes first available at Crogenitor Level 11, along with Krel and Revenant. That is unless one has bought the Limited Edition and unlocked Maldri Gamma. Despite his classification as a Ravager, Maldri plays more of a supportive role. With his Squad Ability, Maldri can disrupt enemies, providing relief to his allies in Co-op.

Maldri is most often used for his squad ability. With AoEs such as Celestial Comet is the case of his Gamma Variant, Zrin's Plasma Column, SRS-42's Flak Cannon, Magnos' Kinetic Wave, and Sage's Strangling Briars, Maldri can deal his chaos to large numbers of enemies at once. While useful in Solo, he is at his best in Co-op. Maldri will dive into the middle of fights, wreaking havoc while his allies deal damage.

* If attained via Limited Edition. Also is Activated instantly.

Erratic Strike, as the name suggests is one of the most unpredictable Attacks in the game. It can either one-hit a Minion...or leave a mere scratch on it.

There really isn't much to do about Erratic Strike. Maldri is a luck-based character, and his Abilities reflect that. However, there are ways to improve your likelihood of success.

Attack Speed and Increases to the Minimum Damage of Maldri's weapons are recommended. With Attack Speed, comes a higher chance to deal good damage in a short amount of time. Minimum Weapon Damage makes the possible damage inflicted by Erratic Strike more reliable.

This is perhaps one of the few instances where an increase in the maximum weapon damage should be avoided, as it will make the possible range of damage even larger, and thus more unreliable.

Probability Assault may be Maldri's most useful Ability, but it is Quantum Superposition that gets players to try him out. An incredible ability, both functionally and visually, it allows Maldri to wreak havoc on his enemies. With Probability Assault, he can disrupt multiple enemy units at once, allowing Maldri to synergize with himself.

It is also useful against Captains and Destructors, if they are alone on the field, then they're the only possible targets.

A feature of this ability that is not very apparent is that Maldri can attack from any point on the screen, as long as he can target an enemy, regardless of environmental objects in the way, ravines in the map, or even being at a vastly different altitude compared to his enemy. If he can target the enemy, he will hit it.

One can also start with Blitz's Plasma Wreath, and cause enemies he uses this attack on to receive additional damage. He'll also gain +100% Resist Rating.

"For the next 8 seconds any enemy that damages or is damaged by Maldri will suffer random negative effects."

In fact, although not the most reliable, it is one of the most effective abilities, since it affects both enemies he attacks and enemies that attack him.

As if inflicting any sort of negative status inflicted on an enemy wasn't good enough, it can inflict multiple negative statuses, even if they're random. Not just that, it can also generate an AoE Burst around Maldri, dealing damage to all enemies in range. That's quite a few effects, although it will probably only inflict a few of these during its duration.

In addition, Probability Assault can play both an Offensive and Defensive ability, being helpful in Solo and Co-op PvE, as well as PvP.

Pairing it with an AoE, like Zrin's Plasma Column or Sage's Strangling Briars, can be very helpful to the user, but mainly very annoying to the one they're attacking.

Probability Assault's Modifiers are listed below.

"Thanks to unpredictable motion, Maldri's Dodge Rating is increased by 100%."

This is helpful, because most of his attack require him to be in melee-range, and most melee attacks deal Physical Damage. 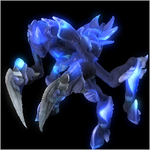 A seemingly useless ability, Dimensional Rift certainly has its purposes.

It can be used to disable a more dangerous enemies, such as a Lieutenants or Captains, while Maldri picks-off the weaker enemies, possibly by using Quantum Superposition. This way, Maldri can put full attention and energy into killing the high-priority enemy. This can also be used in the opposite way, banishing the horde first while focusing on the Lieutenant or Captain.

Banished enemies are not targetable, and therefore Probability Assault will not choose them when picking targets, allowing you to get a chain of 6 attacks on a dangerous enemy or boss.

It is also helpful in PvP, against opponents like Meditron. If you use Probability Assault, but then realize you are facing Meditron, you'll realize that he could simply use his Syndrome Shift and steal the Probability Assault buff. Simply use Dimensional Rift, and he'll be unable to make any actions, let alone steal buffs, while you let any buffs you have wear off. 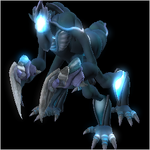 "Creates a spacetime distortion bubble at your location for 12 seconds. Enemies and enemy projectiles are slowed by 60% while within the bubble."

Time Bubble can be a helpful little ability, especially since Maldri will already be in melee range.

Slowing projectiles enemies' Movement and Attack Speed will allow Maldri to outmaneuver them while inside the bubble. In addition, it can keep them from moving out of the way of his attacks, helpful against annoying strafing enemies, such as Caustic Stingers.

Also, Maldri Beta can simply activate Time Bubble, then unleash Quantum Superposition, damaging enemies in that area while they can't move away. Very helpful in PvP. 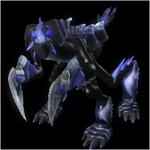 "Warps a nearby comet down to the planet's surface, causing XX-XX physical damage in a 4m radius and knocking affected enemies back."

Maldri Gamma is the Variant available to all players who purchased the Limited Edition of Darkspore from the start, while everybody else must wait until Level 42 to unlock him. The reason why he was chosen to have this honor is quite obvious (besides the obvious "42" reference), as Celestial Comet is one of the best Variant Abilities for Quantum Heroes. With Probability Assault, Maldri can deal his random status effects to enemies, as well as knocking them back. The knock-back itself is useful enough, so the other negative effects are not necessary, but are a great boon.

In addition to his usual stats, this Maldri should use gear that boosts AoE attacks, to improve Celestial Comet. 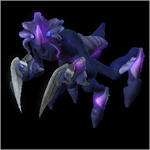 "Launches an accelerating miniature asteroid that deals XX physical damage damage plus additional damage based on its current speed."

Shooting Star is a difficult ability to master, but can be somewhat effective if used correctly.

It's best used over a long distance, but this increases the chance of the target moving out of the way. In Co-op, one player can use Virulent Vines (or any other snare) to keep the target still, while Maldri Delta can launch Shooting Star.

In Solo, it's more complicated. Using a slowing ability, such as Titan's Dazing Shot, SRS-42's Flak Cannon, or Sage's Strangling Briars can slow an enemy down, hopefully keeping them in one place long enough.

Also, if Maldri is using Probability Assault, he can use Quantum Superposition in the targets area, and possibly inflict a kind of Slow or Snare, or at least keeping the enemy per-occupied enough in that area to move out of the way.

In addition, if Shooting Star hits its target, Probability Assault will inflict an additional debuff, making it do more than just damage.

Projectile Speed is a good bonus, because not only will it help Maldri to actually hit the target before it moves, but it will also deal more damage. It will also be augmented by increases to physical damage.

As a Ravager, Maldri relies on Dexterity. One should focus on maximizing his Health, Power, and defenses, as he is often in the middle of fights, and has a high Power usage. Cooldown Reduction and Power Leech will allow him to spam his abilities.

Just because his passive buffs his Dodge Rating, doesn't mean players should allow the stat to be low on him. The higher his defenses, the better chance of survival, so never settle for less.

NOTE: Not all of these stats are necessary, but are things to keep an eye out for. Also, these stats mainly apply to just Maldri and his abilities, not any other squad abilities.

Retrieved from "https://darksporegame.fandom.com/wiki/Hero_Strategy:_Maldri?oldid=16063"
Community content is available under CC-BY-SA unless otherwise noted.