Meditron, the Repair-Bot is the second Cyber Tempest unlocked in Darkspore, the first being SRS-42. As his name and title would suggest, Meditron (or Medi, as players affectionately call him) is a dedicated healer and user of utility.

Meditron possesses one of the few Healing abilities in the game, a fact that in itself makes Meditron a desirable character. His other attacks aren't too bad either, with a useful homing Basic Attack and an excellent piece of utility in his Unique. But Meditron was not made to be an offensive character. A good player can hold his own with Medi, but he is no SRS-42. Unlike SRS, Lumin, or Orion, who provide pure offense, Meditron is a master of utility, built to help his allies as much as possible and keep them alive during the process. He is best in Co-op, with allies to aid, and watch their back.

Players now use Meditron much more frequently, after they switched to him from Tork due to a widely disliked change to his Sporogenesis.

"Launches a swarm of nanobots that home in on a single enemy and deal 6-12 energy damage."

A homing Basic Attack, one of only a handful of other homing projectiles, Nanoswarm is very helpful against strafing enemies, such as Necrotic Leeches and Caustic Stingers. It may deal less damage than SRS-42's Homing Missile, but it has a much longer range, which is helpful for killing off-screen enemies.

Smart use of the terrain can allow Meditron to hit enemies that most Heroes would have to draw out. A good way to start a fight is to put yourself in as difficult a place to reach as possible, then start firing at Darkspore. With luck, they will have to waste time getting into a better position, and will be unable to fight back for a very brief period.

+Projectile Speed, +Range Increase, +Cooldown Reduction and +Attack Speed will greatly boost Nanoswarm and get it to its highest potential.

"A cleansing pulse emanates 10m from Meditron, simultaneously transferring all nearby debuffs to enemies and stealing buffs from enemies for allies."

One of the most unique Abilities in the entire game, Syndrome Shift is a very useful both in solo and cop-op gameplay. This is because it both transfers debuffs from friendly units (self, allies, and pets) onto nearby enemies, but also Steals Enemy Buffs and gives them to himself and any Heroes or Pets in range. (Although his Sentry Drone doesn't seem to receive any stolen buffs.)

Many Darkspore, Lieutenants in particular, buff themselves and allies, or inflict debuffs (sometimes both). Medi can wait for them to apply their buffs/debuffs, then use Syndrome Shift. Suddenly, Underminds find themselves Burned and with Energy Vulnerability; Raytheoids have their damage buff stolen; Decelerators are Slowed; Hasters find you faster; Ragetusks are no longer big and enraged. Even the Slow from a Dimensionist's Time Bubble can be transferred.

This is a useful ability against Minions as well. Novas, Protoplasms, and Plasmic Howlers are just a few examples.

In addition, on Cryos' Frigid Caverns level, the Poison inflicted on allies by the Toxic Fungus destructible can be used to poison nearby enemies.

And to top it all off, it is an excellent ability in PVP. When fighting Maldri, for example, when he gets the Probability Assault buff, Medi can steal it.

This ability, however, is next to useless if there are no buffs to steal or debuffs to transfer. Also, this ability cannot steal Elite & Captain Affixes.

For such an Ability, +AoE Radius, +Buff Duration, and +Debuff Duration are all a must.

One of the best heals in-game, Reconstruct can refill a target's health and increase their max health, helping them to last longer. After the change to Tork's Sporogenesis, many people chose Meditron as their main healer instead.

The only problem with this heal is that you have to stay still for the duration of the heal, which in co-op can make you very vulnerable.

Reconstruct benefits greatly from Healing Stats. + Channeling Speed will also increase the rate at which the target heals.

The Modifiers of Reconstruct are listed below.

While most players consider Sentry Drone a terrible passive, it is actually one of the better passives in the game. The drone that orbits around Meditron provides continual Energy Damage to enemies, although it is a very small amount. It's also non-destructible, so it can't be killed by enemies, unlike other pets. Therefore this gives Meditron a source of free damage, which can be dealt while fleeing from enemies, making him a great hit-and-run character. With enough Movement Speed, Meditron can then kite in dire situations.

It also helps him to continually damage enemies while he's using channeled abilities, such as his Reconstruct.

Unfortunately, there is no on - off switch. Sometimes it will attack an enemy before Meditron wants to, causing him to be swarmed by a bunch of enemies before he's prepared, so it's best for Medi to keep his distance until he's ready.

Although +Pet Health doesn't affect the Drone, it is affected by +Pet Damage. 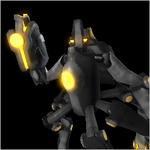 "A painful melee range electrical strike that deals 56-93 physical damage and taunts the target for 6 seconds."

This variant of Meditron is very unique, as it is the only variant that has a Physical Damage-dealing attack. If equipped with lots of Mind, +Cyber Damage and +Physical Damage, and if combined with Skar's Shadow Cloak Meditron Alpha can be become the deadliest opponent for any non-Ghostly or Spiky enemy. The combo of stats plus a 100% Crit Chance makes Charged Strike, easily said and for lack of a better word, annihilate its targets.

The thing to watch out for when using Charged Strike are Spiky enemies, as they can make all the damage backfire on Medi. In order to solve this problem one should equip Medi with Cyber Damage Reduction and Dodge Rating, giving him the edge even in the most hopeless moments.

Aside from the usual build for Meditron, this variant benefits greatly from +Attack Speed, as it will make Charged Strike quicker, making it able to hit fast, strafing enemies; which normally would simply dodge the attack by moving away. +Increased Range will also help a lot. 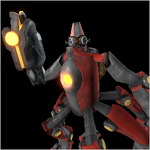 "Piercing laser beam attack that deals 34-51 energy damage to all enemies in a line."

A favorite of many players. Zetawatt Beam allows Meditron to deal respectable damage from afar, as opposed to his Alpha Variant, which requires him to be close. By using Nanoswarm, Meditron can have several enemies run towards him, then get nailed by the piercing laser beam.

Zetawatt Beam benefits from increases to the damage dealt by AoEs.+Projectile Speed and Energy Damage will also ensure the target is hit very hard. 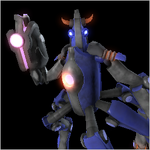 Users should focus on +% Helpful Status Duration and Cooldown Reduction. 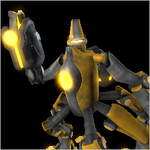 "Places a mine that will explode if an enemy comes within 3.4m or after 15 seconds. The mine deals XX-XX energy damage to all enemies in a 4m radius and dazes them for 6 seconds."

The first use that comes to mind with Proximity Mine is to drop it when large numbers of enemies get too close. In this case one would want the ability for the Daze it inflicts, allowing the player to escape, or using Meditron's homing attacks to draw enemies into his traps.

Players will want to focus in increases to AoE Damage, Duration, and Radius. +%Duration of Harmful Stuatus Effects Inflicted is a helpful stat here as well.

Meditron requires vast amounts of power to fulfill his purpose. Power and Mind are a must have, as is Cooldown Reduction. Movement Speed will help him get where he is needed.

NOTE: The following stats are not necessary, but very helpful in gameplay.

Retrieved from "https://darksporegame.fandom.com/wiki/Hero_Strategy:_Meditron?oldid=16049"
Community content is available under CC-BY-SA unless otherwise noted.