The second Genetic Hero to be unlocked in Darkspore, Sage, the Life Forester is the very first Bio Hero unlocked, and the very first Tempest available.

Sage is based on making himself and his allies last for as long as possible, with a variety of healing and support abilities.

Sage is often considered weak amongst many players. Well that is NOT true. Sage is one of the best heroes to play with, as long as the player knows how to play him. As him being a Tempest, Sage is focused on distance fights, designed to take out many enemies from long ranges and, while then, keeping himself, his pets and his allies alive for as long as it is possible.

Sage pairs well with other defensive squad abilities. Blitz's Plasma Wreath and Wraith's Ghostform are two such examples. With Tork , Sage had be given a way to cleanse himself and allies of Debuffs, one of the few support roles he is defficient in. Skar's Shadow Cloak can be used to plant more powerful Strangling Briars and Trees of Life. Maldri's Probability Assault can be used in conjunction with Strangling Briars to delay enemies coming through a choke point. Magnos's Kinetic Wave can be used to knock enemies back into Strangling Briars.

One popular combination is Sage, Krel , and SRS-42 . The Bio Tempest and Plasma Ravager synergize quite well together, with both gaining a strong physical attack. Sage can use Flak Cannon to bring enemies in his Briars down to a crawl.

"Fires a sphere of bioplasma that deals 5-8 energy damage and lightly heals all allies near the target for 20% of the damage dealt."

Sage's Basic Attack is very handy, when used properly, besides shooting enemies to death. That's because, when in co-op, when an ally/pet is fighting and Sage's shooting the same enemy, the ally/pet will get healed. Not much, but something at least. And even IF Sage is forced to a close-range fight, the Basic Attack will heal him, while the Darkspore Mutant attacking him will keep losing HP.

"Plants a tree for X seconds that grows over time. While the tree lives, all nearby allies are healed for up to 5 / 5 / 5 / 6 health. When it dies, the tree explodes in a burst of healing energy and heals for up to 21-32 / 20-31 / XX-XX / XX-XX additional health. The amount of healing is determined by the size of the tree."

A very good AoE Healing Ability. One note: ALWAYS put the tree in the vicinity, so that you can take every tick of the heal. In the end, the tree explodes, healing even more. This pairs well with Orion's squad ability, Chrono Flux, which will allow Sage to almost 100% uptime, meaning that he could immediately put-up another tree after the first one is gone. The Tree of Life has however limited range, and in Co-op it may determine the difference between life and death if a player got locked down by an Operative. Putting a tree right by the side of the locked player, will ensure you got more time to free that player.

"Creates an area of briars with a 12m diameter that deals 6 / 6 / 6 / 6 physical damage per second for 10 seconds to enemies caught in it, while reducing their movement speed by 75%."

A sincerely great Squad Ability, Strangling Briars can take out many enemies, while you can simply watch all the destruction (optional 'evil laughter' sound). Increased AoE Radius will help much, by slowing even more enemies for longer, forcing them to take more ticks of the damage.

The Squad Ability Modifiers for Sage are featured below.

"Spawns a melee pet every 20 seconds up to 2 minions at a time. During Overdrive, up to 4 pets can spawn."

Dendrones are useful little spawns, providing Physical Damage, melee, and distracting enemies. While they don't do instant kill damage, many people seem to take for granted that any damage dealt to enemies is good damage (better something than nothing). They are a recyclable source of DPS, which while not the greatest asset of Sage, are still appreciated.

It is worth noting that Dendrones will attack the Destructors during cut scenes, like all pets, allowing for free damage while the player is unable to act. 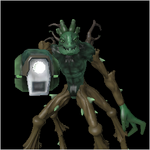 "Sends the targeted ally into a rage, Increasing the damage of non-periodic attacks by 9 for 30 seconds and regenerating 35 health over that period."

Considered by many players to be Sage's most powerful variant, Sage Alpha can work effectively in both Co-op and Solo. This is due to the incredible ability that is Enrage. With it, Sage is given an increase in damage, and regeneration. With Cooldown Reduction, a player can keep Enrage for the entire level. While Power Leech is not necessary, it will help quite a bit.

In Co-op, Enrage can be cast on powerful Sentinels, such as Zrin or Magnos, or with Ravagers like Blitz or Vex, increasing both their survivability and DPS.

Periodic-damage dealing heroes, like Krel and Viper, do not benefit from it as much since it only buffs upfront damage.

The only thing to watch out for is Enraging one's own pets. A common error when one first picks up Sage, with practice this can easily be avoided.

When running Sage Alpha, Health Leech is not necessary, but will not hurt. Power Leech is also not necessarily needed assuming the player uses his or her Basic Attack mainly, but if they cast lots of Strangling Briars, and other Squad Abilities, the Power Leech is recommended. Cooldown Reduction, Attack Speed, Periodic Damage, anything to increase Damage Dealt is appreciated in this offensively minded build. 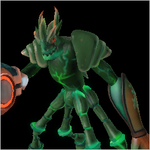 "Roots the target in place for 8 seconds and applies an infectious disease that deals 55 energy damage over that period. The disease will spread to other nearby enemies, dealing 31 energy damage to each."

More damage based than the other variants, Sage Beta can use the incredible Virulent Vines to weaken hordes of enemies. This can keep a key opponent out of the fight for the short time as well, so decide carefully before casting.

Also, Virulent Vines can be used on High Priority enemies, to trap them and let his Dendrones close-in.

A simple yet very effective strategy, is to use Virulent Vines on an enemy with the highest health, then cast Strangling Briars beneath it, causing it to take very high portions of DoT damage, and slow enemies inside while they are diseased.

As one would expect, this variant benefits from +%Periodic Damage gear. With Health and Power Leech, he can take advantage of the contagious damage to quickly recover.

There is some disagreement between players whether Sage Alpha or Sage Beta is better. Both Virulent Vines and Enrage are excellent abilities. In the end, it comes down to play-style. 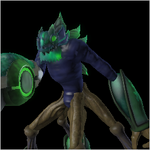 "Sage charges to the targeted point and roars, taunting all enemies within 8m for 5 seconds and taking 25% less damage from all sources during that time."

Although Roar of Derision isn't one of the more used Variant abilities for Sage, it can be used to make him an effective Tank. So with lots of Dual Leech, Periodic Damage, and Cooldown Reduction, Sage Gamma can be used to keep enemies away from allies in Co-op.

The prior listed stats are needed. Also, +%Threat Level can be used to make sure enemies keep their attention of Sage.

Roar of Derision can also be used to draw-in a large number of enemies into an AoE, such as his Strangling Briars or Char's Squad Ability, Fiery Eruption, affecting enemies that would normally focus on other targets. 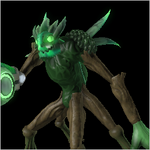 "Summons a flying creature which periodically heals Sage or allies for 11-22 health. The creature will vanish after 30 seconds."

Often overlooked, Sage Delta can be used as a dedicated healer in Co-op. With the Mura's Affix, each of Sage Delta's abilities (aside from Dendrones) will heal himself and/or allies.

+Pet Health can be used to increase the durability of the Sprite. As always, Cooldown Reduction and Dual Leech.

Equip like any other Tempest, which makes it a lot easier, due to the fact, that Sage is one of the easiest heroes to equip, making up for his gameplay liabilities. When editing Sage, focus on Mind, Power, Health (like all other heroes) and Resist Rating.

NOTE: Not all of these stats are necessary, but are things to keep an eye out for. Also, these stats mainly apply to just Sage and his abilities, not any other squad abilities.

Retrieved from "https://darksporegame.fandom.com/wiki/Hero_Strategy:_Sage?oldid=16037"
Community content is available under CC-BY-SA unless otherwise noted.