The first Hero to have all four Variants unlocked at the same level (Crogenitor Level 20 in this case), Seraph-XS is a unique hero. One of the few ranged Ravagers, and the only Cyber Ravager, Seraph has a unique niche that can't be filled by any other Hero. She is sometimes called "The Kiting Goddess", due to her hit-and-run gameplay nature.

Seraph-XS is an unusual Hero. Many players regard her as a potentially fantastic character, which is being held back by a few things.

First of all is her lack of synergy with other Heroes. Seraph's Passive and Squad Ability are somewhat lackluster, preventing her from having any viability to a Soul Link Squad. Even for herself, Stealth Module is a very temperamental Passive, with few actual benefits. And Auto Turret scales notoriously bad with the rest of her damaging moves.

At the same time, Seraph has an incredible Basic Attack, which is really the main reason to play her. Seraph is better in hit-and-run tactics than all other heroes in the game, perhaps excluding Tork.

When using Seraph, you should focus on her as the main Hero of the squad, a job she does well. As such, you should choose Heroes with powerful Squad Abilities. SRS-42's Flak Cannon, Sage's Strangling Briars, Magnos' Kinetic Wave, and Revenant's Terrifying Curse are all strong abilities, which also doubles as means to keep enemies from getting to close to Seraph.

As a Ravager, Seraph is rather fragile. Several Heroes possess defensive or recovery based Squad abilities she can use to increase her survivability. First of all are Arakna's and Meditron's Squad Abilities, Essence Volley and Reconstruct respectively. Both are used to recover health, and both have their pros and cons.

Arakna's Essence Volley is a series of homing projectiles, each of which recovers 50% of the damage dealt. While it can deal impressive damage and is an excellent attack, it requires the caster to be in combat. As for its homing properties, Essence Volley shots have a habit of getting lost and circling around to try and hit an enemy, using up their range.

Meditron's Reconstruct allows Seraph to heal at any time. However, the channel means that in order to reliably heal up, Seraph should only use it out of combat, so she can't be overwhelmed while channeling.

Wraith and Blitz have Ghostform and Plasma Wreath respectively.

Wraith's Ghostform provides temporary immunity to all ranged attacks, and a chance to avoid melee attacks. A powerful ability, it still will need to be continually recast, which will put a strain on her Power supplies.

Blitz's Plasma Wreath will only boost Resist, but will damage enemies who get to close as well, and will generally last a long time on ranged characters like Seraph.

A interesting strategy is to use Sage and Skar. You play as Seraph (alpha), and slow enemies with Strangling Briars, and for massive critical damage you use Shadow Cloak then Zetawatt Beam.

"Lobs a slow grenade that explodes after contacting an enemy or after 1.5 seconds. It splits 8-14 energy damage between enemies in a 3m area, plus XX-XX bonus damage per enemy struck."

Seraph's Basic Attack is truly what makes her a great stealth/hit-and-run fighter. Timed grenades fly through the air and explode on impact with enemies or after a given period of time. This can be used very well if used rightly. Synergy is the key to the demolition: Shoot, dodge eventual projectiles, take position, repeat.

This also makes Seraph really good at sniping enemies from above. If the player spots an enemy or a group of enemies while at a very high altitude compared to them, Seraph can fire a few grenades and, if the obstacles in front of her aren't too big, the grenades will roll down the hillside and blow up upon contact.

"Plants a bomb that taunts all enemies within 8m, then explodes, hitting enemies for 16-27/15-25/XX-XX/XX-XX energy damage, and stunning them for 3 seconds. The bomb can be destroyed, and it's health scales with Seraph-XS' health."

This ability is used mostly to get enemies off of Seraph, if she gets overwhelmed. This will allow her to run away and fire more rounds of grenades at the Taunted enemies. Only one advice when using this ability: Once you plant it, run away! The Taunt works only when the bomb isn't detonated and it takes a while before it goes boom, so you got plenty of time to get yourself out of there and start mocking the Darkspore with Contact Grenade.

With enough +%Movement Speed, Attractor Bomb can have an alternative use. By hanging just out of the Darkspore's range of vision, Seraph can run in as soon as she turns invisible, plant the bomb, and run out. If the Bomb detonates, Seraph will be able to run back and kill any survivors.

Naturally, players will want to focus of Seraph's health. This will increase the likelihood that the bomb will be able to detonate, and will increase her own survivability.

"Places a turret that fires lasers dealing 5-9 energy damage at nearby enemies. The turret will break apart after 10 seconds."

A good ability to use, when you have to switch to defensive gameplay, Auto Turret is a good boost to the damage Seraph (or any other Hero in her squad) deals, though its damage scales badly compared to her other abilities. Nonetheless, any damage done to enemies is good damage and Auto Turret does this well under its entire "lifetime".

A point of interest is that the Turret's laser counts as an Ability. This means that with Cooldown Reduction the rate of fire is increased. This also means the Turret can be Suppressed.

The Squad Ability Modifiers for Seraph's Auto Turret are listed below.

"Becomes invisible every 12 seconds for 3 seconds. Attacking or taking damage will break the invisibility."

This Passive, unlike any other, is very difficult to master. First of all, the stealth will break whenever Seraph attacks during the cloak or receives damage while under the stealth.

However, there are pros even for this hard Passive. Whenever Seraph is forced to run away, she can plant Auto Turrets and Attractor Bombs to get some clear shots at the enemies. Not just that, she can go Stealth and then simply outrun her enemies, heal and then, under the Stealth, speed back into action. Stealth Module can also be used to start fights. By closing in on her enemies while stealthed, Seraph can easily gain the upper hand.

ATTENTION! Currently, there's a Glitch with Stealth Module and Skar's Shadow Cloak;
When using Shadow Cloak with Seraph, her passive will actually cause herself to un-cloak from it. While cloaked though, it will still behave normally (i.e. 1st sec. damage immunity & auto-crit), but this glitch means that your window of opportunity is greatly reduced. 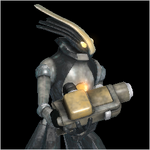 "Piercing laser beam attack that deals 36-54 energy damage to all enemies in a line."

Considered to be one of the more powerful variants of Seraph, Seraph-XS Alpha has access to the devastating ability that is Zetawatt Beam. Utterly dangerous, when used right. For example, when facing a horde, not only can Seraph do her "classic" tactics, by placing bombs and turrets, while she herself leads enemies straight towards the traps she placed and, while doing so, firing grenades, she can also use Zetawatt Beam to clear large groups of Darkspore with one shot.

This Seraph pairs well with Heroes like Sage and Skar.

Sage's Strangling Briars will dramatically slow down all enemies entering it along with the Attractor Bomb + Auto Turret combo and Shadow Cloak + Zetawatt Beam combo will result literally in a sea of blood, when used correctly. However, the player will need to hurry up and fire the Beam, otherwise the Cloak will go away because of her Passive. 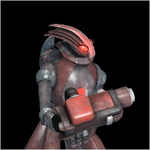 "Places a mine that will explode if an enemy comes within 3.4m or after 15 seconds. The mine deals 25-35 energy damage to all enemies in a 4m radius and dazes them for 6 seconds."

This variant of Seraph is more based on the hit-and-run tactics than any other hero in the game. Her Proximity Mine will keep the Darkspore off of her back, while she can devote herself to running and shooting, creating chaotic rains of blasts, lasers and grenades.

The most preferable squad-mates in a "Tri-Genesis Squad" for this variant of Seraph would be Magnos and Jinx. Magnos' Kinetic Wave will ensure Seraph has always some space to run, while the Curse of Weakness will increase her damage output and survivability, due to enemies dealing less damage and taking more damage than usual. 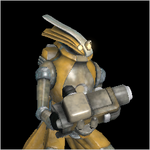 Probably the most popular variant of Seraph-XS, Seraph-XS Gamma earned her fame due to her Variant Ability, Omni-Shield. The fact of being temporarily invincible and fully mobile, unlike some NPC's in the game, sure tempts well. The increased survivability makes this variant of Seraph more defensive than the other, so she can face enemies up-close, while the other variants would be forced to go hit-and-run in order to kill them.

Seraph Gamma's Squadmates should preferably be Wraith and Andromeda. Amdromeda's Repulsion Sphere will knock the enemies back (damage/slow them if equipped with the Modifiers), redirecting all projectiles in different directions depending on the angle. The Ghostform, however, can be used in a defensive purpose, during the recharge time of Omni-Shield.

The main stats to apply on this Seraph would be +% Helpful Status Effects Applied, +%Cooldown Reduction and Movement Speed. 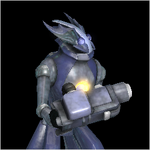 Seraph Delta is mostly designed to take down high-priority targets with the help of Charged Strike. If combined with Skar's Shadow Cloak, Charged Strike will cripple if not even kill Lieutenants with barely one hit.

The worst nightmare for this Seraph are the Ghostly and/or Spiky affixes on Elites/Captains.

The Ghostly Affix will increase the Dodge Rating of the Elite having it, making Charged Strike much less effective. If not lucky, the Elite will simply dodge the attack, wasting Seraph's Power Reserves for nothing!
The Spiky Affix is even more dangerous. Not only will Seraph waste Power while inefficiently trying to damage the Elite, the Affix can make 20%/30%/40% of the damage backfire on Seraph!!!

The Shifted Affix won't be a problem for the Variant Ability, since it's Single-Target Damage, but it will render all of Seraph's Abilities (excluding her Passive and Squad Ability) completely useless. If there's an enemy with any of these Affixes you should switch Seraph for another hero immediately.

When equipping Seraph-XS, focus on Dexterity, Power and Health. Basically, an equipment for an ordinary Ravager. Movement Speed and Cooldown Reduction will also help. The so-called "Sravana's Boon" will be helpful as well, considering for example Seraph Beta's Ability Usage.

Note: Not all stats listed below are necessary. These are just stats to keep an eye out for if they show up.

Retrieved from "https://darksporegame.fandom.com/wiki/Hero_Strategy:_Seraph-XS?oldid=16050"
Community content is available under CC-BY-SA unless otherwise noted.