Start a Wiki
Titan, the Impenetrable becomes first available at Crogenitor Level 8. Titan is a unique Sentinel, whose main role is to keep enemies off his allies and take them on himself. His entire gameplay is centered around killing entire hordes of Darkspore.

In early levels, Titan is an unstoppable juggernaut, capable of tearing through a level with his Basic. As the enemies grow stronger, though, his strategy shifts and Titan soon finds himself sharing a niche with Krel: Ability Spamming.

Titan is built to leap straight into the middle of a swarm, casting AoE attacks then retreating. His passive renders himself immune to a certain amount of damage, while his Unique and Squad Abilities deal great damage with his Basic Attack filling in the moments where Titan's Abilities are on Cooldown. Given his high Ability usage, he should be given as much Power and Power Leech as possible. One could also use Overdrive Duration and Recharge gear to give him brief periods of time where energy is not an issue.

Titan, being a bulky Sentinel, loves Vex's Chrono-Blink. With it, he can dive into a group of enemies and freeze them in time, preventing them from retaliating for a short period while he attacks them, and uses any of the Leech gear he has to refill a bit. Viper's Thornado and Zrin's Plasma Column are both close range AoEs that Titan can use to deal even more damage. Arakna's Essence Volley can be used to refill Titan's Health gauge, increasing his survivability.

As usual, the Squad Abilities of Wraith and Blitz, Ghostform and Plasma Wreath respectively, are excellent defenses. Ghostforn renders Titan temporarily immune to all ranged attacks, and greatly increases his Dodge Rating. Plasma Wreath, in addition to dealing damage, increases Resist, which in turn increases the power of Titan's shield, making it an excellent choice.

As one may expect, gear that improves AoEs is a must. At the same time, Titan should be on the lookout for Shifted enemies, which after Onslaught, render him difficult to use, if not even useless. As Leech stats are usually on Hands, Titan will need to take advantage of any source of recovery he can. With Capsule Effectiveness, Titan can at least heal up after a fight.

"A spray of gunfire that deals 6-12 physical damage split between all enemies within 4m, plus 6-12 bonus damage to each enemy in range."

A unique ability, Bullet Spread is a very effective melee-range AoE, that can kill a large group of enemies quickly, and a single enemy even faster. This allows Titan to easily mow down a horde of Darkspore, or opponents in PvP.

"Titan slams the ground sending out seismic waves that inflict 22-36/XX-XX/XX-XX/XX-XX energy damage to all enemies within 8m. Affected enemies will also be taunted for 5 seconds."

Dealing decent damage, Seismic Smash is a good AoE, but because of the Taunt it should always be used wisely. If used while on low health, against enemies that are Reflective, Shifted, or Cyber Resistant, the Taunt can quickly cause Titan to be overwhelmed. But a benefit of the Taunt is that it will cause them to come into range of his Basic Attack, or another AoE, such as Zrin's Plasma Column, or Blitz's Plasma Wreath.

A strategy in Co-op with Titan is to use Seismic Smash, then Wraith's Ghostform. This will make it extremely difficult for enemies to hit Titan, and as long as they are taunted, they can't respond to his ally's attacks.

Dazing Shot, as a physical, ranged squad ability, is a much appreciated addition to the arsenals of most Tempests. For Titan himself, it is a strong attack that can be used to temporarily shut down a dangerous enemy, such as a Suppression Mechanoid or Molten Crawler.

Magnos can make excellent use of the ability, as his passive will increase its damage. Viper can use it to poison from afar when not using the Virulent Vines variant.

"Titan's shield will absorb XX damage. The shield will recharge every 15 seconds. Increasing the Resist Rating will increase the amount that the shield absorbs."

The fact of being (at least temporarily) immune to all damage makes Titan a very good and unique character.

Absorption Shield is a very effective Passive, especially on Heroes who, while going straight for the enemies, have to rely on their Defensive Abilities, that will keep them alive.

Resist Rating will buff the shield, making it absorb even more damage, increasing Titan's survivability, so Titan Gamma is probably the best variant (as default). 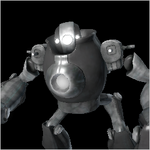 "Places a mine that will explode if an enemy comes within 3.4m or after 15 seconds. The mine deals 27-38 energy damage to all enemies in a 4m radius and dazes them for 6 seconds."

Perhaps not the most strategic ability for Titan, but damage is damage and as Titan is often in the middle of groups, so another dash of AoE damage will never hurt. Just drop the bomb while waiting for another ability's Cooldown to refresh and enjoy the fireworks.

A pretty good strategy is to use Proximity Mine when overwhelmed, then follow up with Dazing Shot on the more dangerous enemies and in the end, hit Seismic Smash. The combo is definitely effective in damage plus the Daze, which will inadvertedly slow down the tempo in which enemies attack making this guy a pretty funny "juggernaut".

Equip like any other Titan. AoE Gear is a must. 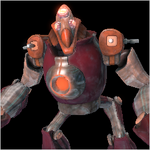 Omni Shield can provide additional defense once his main shield fails. It also can be used to cleanse negative status conditions. Against enemies such as Suppression Mechanoids and Underminds, Titan can prove himself immune to their crippling status conditions for a brief period, so he can deal crippling damage, even outright kill if he is lucky.

Titan Beta, in addition to wanting AoE gear, will benefit from Helpful Status Effects Duration and lots of Cooldown Reduction. 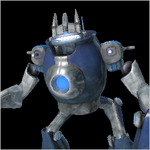 "Piercing laser beam attack that deals XX-XX energy damage to all enemies in a line."

Titan Gamma has the highest Resist Rating of all his Variants, giving him the highest Shield. Zetawatt Beam is a strong attack, though somewhat out of place on Titan. As he is often surrounded by enemies, the straight path of the beam will not hit many of his assailants. Still it is a great ability to deal damage to a single enemy, and anybody in the way will be hurt also. 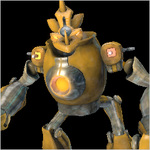 The only ability available to Titan that is not an AoE, outside of other Heroes' Squad Abilities, Charged Strike deals some of the highest damage in the game. Coming off of a Sentinel, with this Variant having the highest strength of all his Variants, any enemy on the receiving end of this attack will be lucky to get out of there limping, if it's alive. An enemy with the Shifted Aura, assuming it is not also Ghostly, can be eliminated with this attack, allowing Titan to not have to switch out. By teaming Titan up with Skar, damage can be doubled.

This Variant will desire increases to physical damage, so he can deal even more astronomical damage.

Since Titan is a Sentinel, Strength will always be a good choice as it will also increase his Health. Any Damage Reductions are greatly appreciated as Titan will always be in the middle of the battles, trying to take on as many enemies as fast as possible, which makes him a great offensive character. Resist Rating will also be very helpful, because it will increase the efficiency and durability of his Absorption Shield. Mind will increase both Resist and Power, making it a stat to focus on once Strength has been filled up.

NOTE: Not all of these stats are necessary, but are things to keep an eye out for. Also, these stats mainly apply to just Titan and his abilities, not any other squad abilities.

Retrieved from "https://darksporegame.fandom.com/wiki/Hero_Strategy:_Titan?oldid=16048"
Community content is available under CC-BY-SA unless otherwise noted.