Start a Wiki
Tork, the Fungal King, the last unique Bio character available, as well as one of the last few Tempests unlocked. His gameplay is centered around debuffs, applying debuffs to enemies and cleansing them from allies. Despite his nerf, he is still a decent character, and his Basic Attack is extremely useful against most enemies, giving him low ability usage. He is also one of the two Heroes that can remove debuffs (the other one being Meditron).

Tork is a very useful Hero both in Solo and in Co-op. His Basic can fly across the map, while his Unique can disable the Darkspore for a while, letting his allies surprise them. His passive is an aura, meaning it will spread to nearby allies. It is very useful for characters like Meditron, Sage, Viper, Char, Zrin and Krel, whose abilities use a lot of Periodic effects.

Green stats are the highest and red ones are the lowest.

"Lobs a spore pod that creates a toxic pool on impact, poisoning enemies for X energy damage over 3 seconds."

One of the few lobbed ranged attacks, Toxic Spores can hit enemies at a different altitude from Tork, or enemies behind a short wall. It's also the only basic attack that creates a lasting AoE, and that doesn't do any upfront damage. However, it's one of the most damaging basic attacks in the game. But when using Tork, watch out for Maser Tanks and Armored enemies, since Maser Tanks can cleanse their allies, and because the poison does a bit of damage at a time, so Armored Elites will be immune to every tick of damage.

"Releases a continuous stream of relaxation spores for 6 seconds that cause enemies within 6 meters to fall asleep."

The only Hero ability that puts enemies to sleep, Sleep Cloud is also one of the very few Channeled abilities that aren't as effective with +Channeling Speed. In Co-op, Tork can get in the middle of a group of Darkspore and cast Sleep Cloud, causing his enemies to fall asleep while his allies attack them, taking no damage at all during the process. Even though they wake up after taking damage, they'll immediately be put to sleep by the Sleep Cloud.

"Emits cleansing spores that remove all debuffs from allies within Xm. Affected allies with gain a heal over time effect that restores X health per debuff removed over X seconds up to a maximum of X."

Sporogenesis, despite being badly nerfed, is still a decent ability for levels with lots of debuff-casting enemies, like Underminds, or on Zelem's Nexus, where the player can simply run towards Gravity Regulators to heal thanks to the Slow they apply on Heroes. However, it's completely useless without any debuffs.

"Increases the periodic damage and healing of nearby allies by 25%."

Overdrive: "Increases the periodic damage and healing of nearby allies by 50% instead"

Rampant Growth can be a very useful ability, both in solo and in co-op. In solo, Tork can appreciate a nice damage boost, and in a squad with, for example, Revenant Alpha, Tork, and Viper, it's even more useful. In co-op, Tork can spread this ability to his allies, and if his allies are heroes like Viper, Krel, Revenant, Char, Sage, Meditron, and especially Tork, it's even better. The reason why I said "especially" Tork is because they can both give each other the aura, increasing each other's periodic damage and healing by 50% and a whopping 100% (!!!) if both are in overdrive. Imagine a co-op team of four Torks (one of which is Tork alpha), all in overdrive and the alpha variant using Virulent Vines on something. That virulent vine will do 200% extra damage! 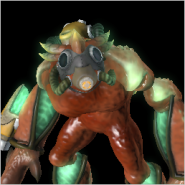 Add a photo to this gallery

Virulent vines is naturally good as it is Periodic Damage and Tork's passive affects himself. The best way to use Virulent Vines is to lock down a high priority target with it, like a Lieutenant, Captain or even a Destructor.

Retrieved from "https://darksporegame.fandom.com/wiki/Hero_Strategy:_Tork?oldid=16041"
Community content is available under CC-BY-SA unless otherwise noted.