Start a Wiki
Ravagers are characterized by being fast and deadly, masters at dealing lots of damage quickly. As the first Ravager revealed, Vex, the Chrono-Shifter exemplifies these traits to the "T".

Vex magnifies his already impressive speed with the ability to slow and freeze enemies in time and the ability to redeal damage dealt in the last ten seconds.

Vex is a character based on dealing as much damage as possible as quickly as possible. His Basic slows his targets, his Passive speeds him and his allies up, his Squad Ability freezes enemies in time, while his Unique redeals all damage he dealt in the last ten seconds.

Vex's Haste Field Passive is an Aura, so he works as a supportive character in Co-op as well. Every Hero in Darkspore benefits from his Passive, meaning that players can just slap him onto a squad and bring him into Co-op (assuming he can work with his squadmates).

With Vex, when solo, the thing to do is 'port into a group of enemies, then attack with everything he's got. After a brief period of frantic slashing and shooting, players should then fire off a Time Lapse, dealing all that damage a second time as Energy Damage. This is useful against the ever-aggravating Acid Shells; after driving them into their shells, deal that damage again. As it will be energy damage the Acid Shell will be vulnerable, and (hopefully) dead. If it isn't, just Chrono-Blink to it, and it'll only survive if it has the Carapace, Armored, and/or Tough affixes.

Vex goes well with slower, hard-hitting squadmates. Zrin and his Plasma Column will both go well with Vex's Squad Ability. Most Sentinels will appreciate a way to quickly get into battle, especially Arborus. Other Melee Ravagers like Viper and Skar like Chrono-Blink, while Blitz will have two ways of getting to his prey. With Skar's Shadow Cloak the damage dealt by either Chrono-Blink or Time Lapse will be doubled. Now, Tempests as a rule are ranged fighters, and most wouldn't usually sync well with Chrono-Blink...

With the proper Squad Ability Modifier, the caster of Chrono-Blink will return to the spot, where they cast the Ability after attacking. Suddenly Chrono-Blink becomes perfect for Tempests. Sage can slow with Strangling Briars, then freeze enemies with Chrono-Blink. Jinx can quickly immobilize an enemy after using her own Curse of Weakness, which is extremely useful for her since she has trouble hitting moving targets. SRS-42 can strike with Missile Barrage after stopping enemies with Chrono-Blink. And so on and so forth...

Not to say, that all ranged characters, can't benefit from the vanilla of Chrono-Blink. Jinx herself could actually follow up on the previous strategy with her Web of Transfusion to recover health. Lumin can use the opportunity to cast a Thunderstorm into the middle of a group. Arakna can unleash her cataclysmic Phantom Burst. And Char can damage his enemies even more by using Concussive Orbit.

But, as we all know, no hero is without flaws. Vex's Temporal Strike is practically useless against Ghostly or Spiky enemies. Reflective enemies will be a problem when it comes to dealing Energy Damage, rendering both Time Lapse and Chrono-Blink practically useless. Unstoppable enemies will be immune to Chrono-Blink's Time-Stop, while Surefooted enemies will be immune to the Slow brought by Temporal Strike. Finally, with his high rate of Ability usage, Vex has a tendency to quickly run out of Power Reserves.

"Inflicts 4-8 physical damage. If Vex swings five times in succession, the final swing will strike twice and deal double damage. Each hit afflicts the enemy with a 10% slow that stacks up to 5 times.

Temporal Strike fits Vex very well. Fast, precise and nastily sharp. Vex has one of the highest attack rates in the game, and with more Attack Speed Vex can deal damage fast. This is useful on enemies with horrifying speed and same genesis, like a group of Strafing Drakons, or of a different genesis type, like Hover-Bots or Stealth Slayers.

The ability to slow down his victims is a great bonus. In a few seconds Vex can get them down to 50% speed, a nice feature especially in Co-op.

Time Lapse can be considered the Grand Finale of Vex's onslaught. This Ability immediately deals medium Energy Damage to all proximite enemies. That is, however, not the best part. Namely, Time Lapse redeals all damage Vex had dealt in the past ten seconds in one big blast of destruction. If Vex was busy, cutting Darkspore to bloody shreds, the effect will be utterly devastating, though the damage does have a limit. Raising the limit will make this ability all the more destructive, until nothing, except for Captains and Destructors, can survive it.

An effective combo is to Chrono-Blink into a group of enemies, then use Time Lapse. This can utterly destroy medium-sized groups of enemies in a matter of seconds.

Due to its very high Damage Output, Time Lapse is best used, when equipped with Dual Leech, Energy Damage, AoE Damage, AoE Radius and, of course, Cooldown Reduction to keep it available, when needed.

This Ability is the thing, that makes Vex tick. An Ability providing instant transport and disabling everything in the area, means that Chrono-Blink can be used in two different ways: an initiater or an escape tool.

The Initiater strategy means, that the player targets a horde of Darkspore and teleports Vex into the middle of that horde, dealing the first damage and stopping enemies in time. While they're disabled, Vex would use everything in his arsenal and finish the spectacle of destruction with a devastating Time Lapse.

If Vex would end up being overrun by enemies, he could use Chrono-Blink in order to escape the horde, then pack any ranged Ability he's got, while escaping.

Haste Field is one of the fewer passives that uses an aura. When using Vex, try to stay close enough to allies when travelling so you could have a speed boost, plus when attacking a group of enemies, sticking to allies would kill the Darkspore just a bit faster. Using Soul Link with Vex and Orion in your squad would bring your speed up quite a bit, plus the aura mentioned earlier for allies, making a fast hero out of you. If you have high enough Health, that is. 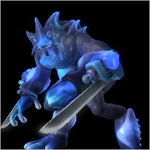 "Creates a spacetime distortion bubble in an your location for 12 seconds. Enemies and enemy projectiles within the bubble are slowed by 60% while in the bubble."

Vex Alpha is one of the best variants to choose for both Solo and Co-op. Time Bubble is an effective ability for Vex, since his basic attack already slows down enemies. He can lure hordes of enemies to enclosed areas and then he can easily deal with the remaining Darkspore one by one. This strategy is best utilized with Sage's Strangling Briars for maximum effect. In Co-op use Vex to place the Time Bubble in front of his allies, so Tempest characters like Andromeda and SRS-42 can blast the remaining Darkspore into oblivion.

When using Vex Alpha, Cooldown Reduction is a must with his constant Ability usage. Health and Power Leech are also very effective since Vex runs out of power fast and since being a Ravager himself Health Leech will keep Vex fighting. 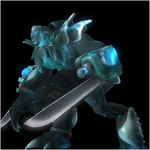 "Launches an accelerating miniature asteroid that deals 19 physical damage damage plus additional damage based on its current speed."

Vex Beta plays more of a support role in Darkspore gameplay, and is more useful in Co-op since he can take advantage of his allies distracting enemies allowing Vex to line up a clear shot for a successful Shooting Star. That is, if you are in regular combat focus on regular Vex strategies to finish off your foes. If one plays Solo with Vex Beta, the player should use Sage's Strangling Briars on incoming Darkspore. Even if the attack misses your original target you might hit another Darkspore minion instead. This could also be used as a sniping attack for long range enemies when your Chrono Blink is on cooldown.

Some enemies stay still for a while before attacking, and Vex can take advantage of this by firing a Shooting Star when they're standing still. And with Prenana's modifier, he can freeze an enemy in time, teleport back, and shoot it.

An alternate strategy to take down Darkspore, would be to hit one of the Lieutenants in a horde with a Shooting Star, teleport into the middle of the horde, start slashing enemies and finish it all with Time Lapse.

With Vex Beta one should focus on Cooldown Reduction and Projectile Speed to give that Shooting Star a little extra boost. Power Leech and Health Leech are also recommended in the same fashion as Vex Alpha. 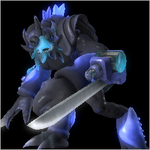 "Warps a nearby comet down to the planet's surface, causing XX-XX physical damage in a 4m radius and knocking affected enemies back."

Vex Gamma shares the same niche as Vex Alpha, serving both roles in Solo and Co-op very well. Unlike Vex Alpha, Vex Gamma is much more offensive in attacks than his Alpha form. Vex Gamma can dive into the heat of battle with Chrono Blink to stun his foes, then use the strategy of multiple strikes with his basic, finishing of enemies with a Time Lapse and a Celestial Comet for devastating results. In Co-op, take point with Vex and charge into battle, having allies close behind to deliver massive damage to your foes. This could also be used to get out of a large enemy crowd.

Vex Gamma goes well with the AoE boosts and Cooldown Reduction. Like previous variants Vex Gamma could use Power and Health Leech for an extra edge in battle. 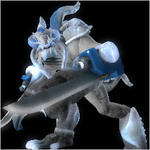 Aside from looking cool, Vex Delta features the Dimensional Rift ability. This attack can give Vex an edge if the odds are against him. Like Vex Alpha and Gamma, Vex Delta can hold his own in combat. Use the Chrono Blink, multiple Temporal Strike attacks and finish with Time Lapse, and if there are too many enemies for you to focus on just use Dimensional Rift to give you time to deal with other foes. In Co-op use Vex's ability to set aside troublesome enemies to deal with later so you can allow your allies to overwhelm and decimate the Darkspore threat. This could be used in conjunction with Chrono Blink to make an escape from deadly enemies.

AoE radius boosts, Cooldown Reduction, and the duration of harmful status effects will put Vex Delta to maximum efficiency. Health and Power Leech are once again useful for Vex to keep him in good shape.

Vex, being a Ravager, depends on Dexterity, Dodge and Crit Rating. A lot of Mind would be good, assuming it doesn't hinder him in any way. Power should be sought at any occasion due to Vex's massive Ability Usage. Attack Speed and Cooldown Reduction are an absolute must, when it comes to Ravagers. Movement Speed wouldn't hurt too, since it will enhance Vex's Haste Field.

NOTE: Not all of these stats are necessary, but are things to keep an eye out for. Also, these stats mainly apply to just Vex and his abilities, not any other squad abilities.

Retrieved from "https://darksporegame.fandom.com/wiki/Hero_Strategy:_Vex?oldid=16065"
Community content is available under CC-BY-SA unless otherwise noted.