Start a Wiki
Viper, the Toxic Ravager is the only Bio Ravager in the game. He is also one of the handful of heroes who are based around some kind of buff/debuff, in this case: Poisons.

Viper is a Bio-Class Ravager who has a unique niche that no other hero specializes in; Viper is completely centered around the Poison Debuff, which although relatively common for Bio-Type Characters, is very uncommon for Bio Heroes. The only other Bio Hero that inflicts poisons is Tork, via his Basic Attack.

Viper's Poisoning Abilities make him a very unique character, with lots of different gameplay styles, but one in particular is especially cool for some: inflict a few stacks of the poison, then leave the enemy to die.

Viper's Expunge combos especially well against Lieutenants. Inflict all DoT Damage available, then hit Expunge. The effect will be devastating.

When picking Squad-mates for Viper, Zrin could be a good choice. His Plasma Column Squad Ability would be a great Offense and Defense against large numbers of enemies, not to mention the Poisons he would quickly inflict from his Toxicity Passive. When playing in Co-op, a great partner for Viper is Tork. His Passive, Rampant Growth, will boost all of Viper's Poison-Inflicting abilities, and thus, making Expunge more powerful.

Vex's Squad Ability allows Viper to teleport in, dealing energy damage and freezing enemies in time, and finally inflicting poison upon them. Drop a Thornado, then run out, and let the weakened enemies come at you once they can move again. SRS-42's Squad Ability, Flak Cannon, is an excellent ranged attack with a very short cooldown. In a matter of seconds, Viper can apply four stacks of poison, and slow enemies to an agonizing crawl.

Another fan favorite is to pair Viper with Krel. As Ravagers, they both benefit from Dexterity Catalysts. Krel's Twinblaze applies Energy Vulnerability, which will increase the damage of Viper's Poison. It also comes with the benefit of being a ranged attack, something that most Vipers lack.

Viper's nemesis' are mostly Ghostly and Spiky enemies, since they will likely Dodge his attacks or inflict recoil damage, thus making the debuff infliction and his attacks nearly useless. In such case, one should switch to a ranged character or a Hero that deals primarily Energy Damage.

An other problem would come up in the form of the Reflective Affix, which would make enemies partially immune to the poison that Viper will apply. However, Viper's attacks deal Physical Damage and the Poison is a secondary effect, which means Reflective enemies will still have a hard time when fighting against him.

In PvP, players should watch out for Meditron, who can use Syndrome Shift to transfer Viper's toxins back onto himself.

Each variant's different stats are separated by a Forward Slash (/), starting with the Alpha Variant's and ending with the Delta Variant's.

"Viper stabs the target with one of his blades, dealing 7-11 physical damage. If Viper swings six times in succession, the final hit will instead deal 14-22 physical damage."

Although called Venomblade, it actually doesn't in of itself inflict any debuffs, the poisons inflicted are via his Passive, Toxicity.

Nevertheless, it is still a nice Basic Attack. It has a relatively short cooldown, and deals plenty of damage, which is only slightly less than his Unique Ability's upfront damage.

A great ability for Viper, seeing as all of his attacks, excluding this one, will inflict a Poison.

It also includes periodic damage effects that may be inflicted by other Heroes, making it even more effective in Co-op (depending on the team). Expunge becomes extremely damaging if one has inflicted as many DoT Damage as it is possible. After doing so, all that remains is to activate Expunge...and watch.

When paired up with Skar, Expunge can deal absolutely massive damage with the help of Shadow Cloak, especially with Viper Alpha, if he uses Virulent Vines before using Expunge.

More a form of utility than an actual form of offense, Thornado goes well with Viper's hit-and-run tactics. When surrounded by enemies, he can quickly poison all of them, then make a run for it, returning when the poison has worn off and they are weakened. Thornado becomes a very effective Ability, if one has put either one of the Modifiers on him.

The Squad Ability Modifiers for Viper are featured below.

"Every time Viper deals damage to an enemy they are poisoned, dealing an additional 4 energy damage per second for 3 seconds. Stacks up to 4 times."

One of the best Passive Abilities in the game, and many would argue it is the best. This is effectively free Energy Damage to all enemies Viper attacks. Viper can act as an effective mixed-offensive character, dealing simultaneous Physical and Energy Damage. This gives Viper a way to deal with both Ghostly and Reflective enemies.

Leech Stats allow Viper to employ hit-and-run tactics as a means to recover himself from wounds or low Power supplies. On Soul Link Teams, Toxicity will allow a constant stream of recovery from the Leeches. A squad composed of Wraith Delta, Zrin, and Viper has proven itself to be one of the most durable squads in the game. Toxicity is capable of changing the tide to your favor: When fighting, let Viper attack a target, run away and wait for the poison do its work. 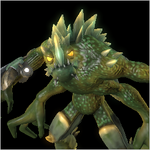 "Roots the target in place for 8 seconds and applies an infectious disease that deals 53 energy damage over that period. The disease will spread to other nearby enemies, dealing 30 energy damage to each."

Viper Alpha is, as most Alpha Variants are, the most balanced variant of all. He is also the only variant of Viper, who deals 3 different kinds of DoT Damage by himself, making his Expunge particularly dangerous.

Since Virulent Vines spread a disease, this Viper can be effectively used as a mass-horde killer. This is even more helpful when Viper is paired with Skar. Every tick of damage will be critical, making it very helpful to clear out annoying enemies like split beetles and dangerous threats like spawns of the Corruptor. The disease will spread to nearby Darkspore and, as the disease spreads and more enemies are damaged by it, more and more Darkspore will have their attention onto Viper and close in on him, thus becoming infected too.

Because of the high Damage Output, Dual Leech is highly recommended as Viper's Abilities will deliver constant streams of damage.

A funny PvP tactic would be to use Viper, Vex and Magnos. Root the player with Virulent Vines, teleport in using Chrono-Blink, deal as much damage as possible, while waiting for the vines to cooldown and when the foe is active again, hit Kinetic Wave, teleport to a safe spot and hit Virulent Vines again.

Players will want the basic equipment for Viper, with more emphasis on Cooldown Reduction. 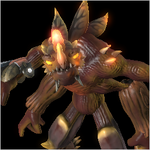 "Summons a flying creature which periodically heals Viper or allies for 10-20 health. The creature will vanish after 30 seconds."

Viper Beta gains one of the two healing Bio Variant Abilities, which in this case is Healing Sprite.

Although not as effective in terms of offense, it will help Viper to play a more supportive role in Co-op, healing nearby allies while he picks off enemies with his poisons. With a constant stream of healing, Viper himself can gain more durability in Solo. However, if Viper wants to use a move that will give him constant healing, most players would rather use Enrage. The usual for Viper will do fine. If a player can find the rare +Healing or +%Healing stats for Viper, then they obviously should be used on his Beta Variant. 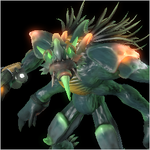 "Sends the targeted ally into a rage, Increasing the damage of non-periodic attacks by 10 for 30 seconds and regenerating 37 health over that period."

Enrage, possessed by Viper Gamma, can be used in very different ways.

Since it's increasing focus on Viper's upfront damage, Enrage can easily change his gameplay, from focusing on stab- 'n'-dash Poisons, to heavy upfront damage and periodic heals. This variant also has the highest Dexterity, so all of his special abilities will deal even higher damage, not including the damage bonus from Enrage.

This variant benefits especially much from Tork's Rampant Growth, because not only will it increase the damage of his DoT Abilities, it will also increase the periodic healing given by Enrage, which in turn, increases the effectiveness of Viper. Equip like any other Viper, with a definite focus on Cooldown Reduction and his Power reserves. 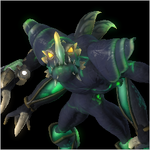 "Viper charges to the targeted point and roars, taunting all enemies within 8m for 5 seconds and taking 25% less damage from all sources during that time."

Viper Delta has access to the ability known as Roar of Derision. This can be effectively used to draw-in a large group of enemies into his Thornado, increasing the number of enemies affected.

Also, one can use it when alone by running into a group of enemies. The result will be that he takes less damage and enemies are taunted. While taking advantage of the Damage Reduction, Viper can hit enemies very hard using AoE attacks, such as his Thornado, Zrin's Plasma Column, Char's Fiery Eruption and so on.

By taunting his enemies, Viper will draw attention to himself. Focusing on his Health, Dodge, and Resist will help him survive in the middle of fights, especially in Co-op.

Equip like any other Ravager, by focusing on Dexterity, as well as Power and Health.

NOTE: Not all of these stats are necessary, but are things to keep an eye out for. Also, these stats mainly apply to just Viper and his abilities, not any other squad abilities.

Retrieved from "https://darksporegame.fandom.com/wiki/Hero_Strategy:_Viper?oldid=16039"
Community content is available under CC-BY-SA unless otherwise noted.