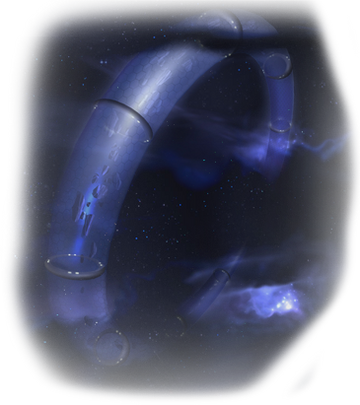 Zelem's Nexus is the name given to the ruins of the once peaceful planet called Nakto. When its star, Zee-Nakto collapsed, Crogenitor Zelem spent the rest of his life building a massive planet-size cylindrical ring that holds all the planet's fragments. The Black Hole that Zelem's Nexus orbits around is called Wha Nakto. Although going unnoticed by most other civilizations, the battle between The Darkspore and The Crogenitors that took place there was later called 'The Nexus Massacre'.

The Nexus is contained within a gigantic cylindrical ring covered in thousands of small hexagon-shaped windows that continuously pulsate a blue light. The Nexus is now littered with the debris planet fragments, ancient fossils, crashed space vessels, and ruins of buildings. Many of the isles are connected by the energy bridges seen above, with one particularly long bridge, which allows players to see Wha Nakto clearly through a relatively small breach in the shield.

Crogenitor Merak accidentally caused billions of deaths when he was working alongside Zelem. He accidentally shattered some of the shields that held in the islands' atmosphere, causing tons and tons of Zelemi, as well as their home isles, to be sucked into the vacuum of space and/or into Wha Nakto.

Eons ago, the star Zee-Nakto collapsed into a black hole, destroying most of its planets. Using his advanced gravitic technology, Crogenitor Zelem engineered one of the great marvels of the galaxy: his Nexus, a chain of asteroid islands and atmosphere preserved inside a vast, transparent cylindrical tube called the Shield Ring.

Zelem spent the rest of his existence maintaining the massive gravity engines that held his Nexus together. Constructing a teleportation network, he moved easily from island to island, studying the evolution of the surviving life forms. A complex array of independent cultures developed, until one intelligent species after another learned to use the teleportation grid and set out exploring the entire Nexus. Zelem regarded the integrated Nexus civilization that arose as his one of the greatest achievements of his career.

In the ensuing centuries, Zelem made detailed studies of countless individual beings, carefully selecting and enhancing hundreds of them to produce a handful of his own genetic heroes.

Zelem and his world were the first victims of the Darkspore, in a bloodbath called the the Nexus Massacre.

(Please note that this description of Zelem's Nexus is outdated. )

Once the gentle planet Nakto, Zelem's Nexus is a freakish array of orbiting islands held together by Crogenitor technology.

The Crogenitor Zelem gave birth to his Nexus by opening a dimensional portal at the core of planet Nakto, shattering it. Zelem spent the rest of his life operating his gravity tethers to keep the islands from crashing into each other, or the orbital centre.

When the Darkspore conquered the Nexus, they perfected Zelem's gravity-wheel, stabilizing the Nexus as a staging area for galactic conquest.

The Crogenitor Insurgency must retake the Nexus to recover Zelem's advanced technology. If purged of Darkspore control, Zelem's Nexus could become the first monumental step... towards freeing the galaxy.

Zelem's Nexus poses a challenge unlike any other thanks to an impressive assortment of Quantum and Cyber enemies.

The Quantum Darkspore take full advantage of spacetime, whether they're causing genetic heroes to forcefully teleport, blinking through space themselves to avoid an oncoming projectile, or manipulating time to speed up their already swift brethren.

They are backed up by Cyber Darkspore, with a wide array of ancient technologies at their fingertips.

Crogenitors who manage to brave their way through the traps that await them will, ultimately, have to face Polaris, the Gravity Manipulator, and overcome his powerful gravitational wells.

The Primary Genesis Type is: Quantum

The Threat Levels and Enemies in this list only applies to levels that are being played for the first time.

HELIX intro: "The Floating Isles were once the foundation of the singularity array, where for centuries, Crogenitor Zelem collected specimens for Quantum Genesis experimentation. Zelem was leader of opposition to experimentation with E-DNA. He long forewarned that large scale Darkspore outbreaks would put all galactic life in peril."

HELIX intro: "The Gnarled Plateau: the [?] found here evolved to thrive in the Nexus, metabolising cosmic rays instead of soil or visible sunlight."

HELIX observation: "This is a crashed Crogenitor vessel. HELIX core within inaccessible. Cause for crash remains unknown. No life signs detected."

HELIX intro: "The Outer Rings. The first coordinated Darkspore attack on Crogenitors took place here. This is where Zelem perished."

HELIX observation: "The supermassive, transparent, cylindrical ring contains the Nexus islands and their atmosphere, which protects them from hard space, and the black hole's radiation."

HELIX intro: "The Chaos Fields, where Crogenitor Zelem originally attempted to restitch together the shattered planet. This is the highest density zone in the Nexus."

HELIX observation: "These mechanisms, once the heart of Zelemi industry, ceased functioning following bombardment of necrotic energies from the Darkspore."

Retrieved from "https://darksporegame.fandom.com/wiki/Zelem%27s_Nexus?oldid=16071"
Community content is available under CC-BY-SA unless otherwise noted.